Born at the spurs of Mount Oiz, the Lea and the Artibai are the two rivers that give character to this always surprising region.

From the rural interior to the coastal towns, Lea Artibai is a true delight for the senses, a stunning natural environment that has zealously preserved its local traditions and its impressively rich heritage, forged through the centuries along the paths that follow the course of its rivers. 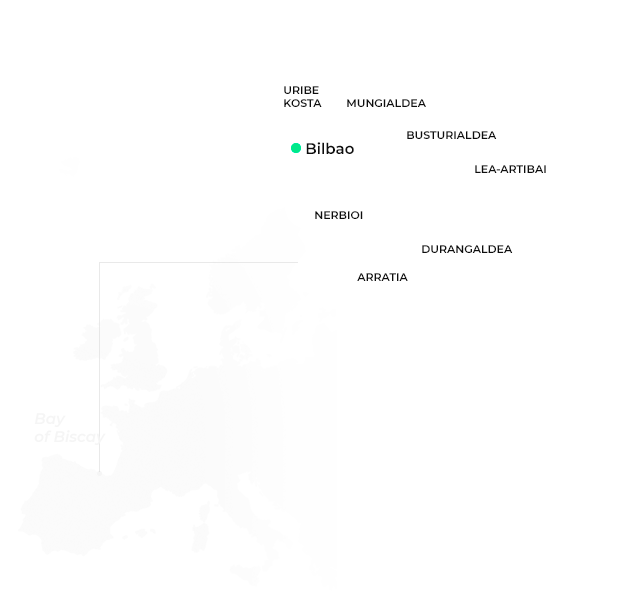 Located in the easternmost part of Bilbao Biscay, Lea Artibai encapsulates the essence of the fishing villages that respect and keep alive the trades of the sea, of its hidden valleys cut by small streams, of the old paths that have been connecting the region to the rest of the world for centuries, of a rich heritage that has borne witness to the lives of the people who have inhabited the area through the ages, and of the traditions that have forged the region’s identity and have become part of its everyday life.

These are some of the places you must not miss if you ever visit Lea Artibai:

Lekeitio. A walk around the Old Town of Lekeitio is like a journey to the past, when fishermen, sailors, and adventurers headed to the port down its narrow cobblestone streets before setting sail. Even nowadays, you can see there how the boats unload their catch. Next to the port is the impressive Gothic Church of Santa María de la Asunción, which houses the third largest altarpiece in the Iberian Peninsula. Loaded with legends, the nearby Isuntza Beach and the magical Garraitz Island in the Cantabrian Sea are perfect destinations for an enjoyable day out.

The Santa Catalina Lighthouse. Standing on one of the cliffs a few minutes away from the centre of Lekeitio, this is the only lighthouse in the Basque Country open to visitors. Thanks to its light, generations of fishermen have been able to get shore safely in the middle of any storm. Apart from boasting impressive views over the Cantabrian Sea, the Santa Catalina Lighthouse gives you the opportunity to find out more about the evolution of marine navigation, allowing you to board a virtual fishing boat to experience how fish was caught in the past.

Ondarroa. The life in this seaside town revolves around its fishing port, the most important one in the Cantabrian Sea in terms of volume of fish caught. In its modern fish market, you can still buy the fresh fish caught by the vessels in nearby waters. Equally characteristic are each and every of the old and contemporary bridges that span the River Artibai. In the old part of Ondarroa, both the Cofradía Vieja and the Gothic Church of Santa María, whose curious sculptures are steeped in legend, are well worth a visit.

Markina-Xemein. The landscape of Markina-Xemein, a town founded in 1355, is dominated by medieval towers and palaces, a reflection of the great importance the place once had. The towers of Ansotegi and Antxia, the Patrokua Palace, and the Convent and Church of El Carmen are just a sample of the town’s historical heritage, in which we cannot forget to include the Church of Santa María de la Asunción of Xemein, the largest church in the Basque Country, and its picturesque Neoclassic cemetery. Special mention must be made to the chapel of San Miguel de Arretxinaga and the three giant rocks treasured inside. Markina-Xemein’s pelota court is also known as the Pelota University as some of the most important pelota players–especially jai alai ones–have mastered their skills there.

Ziortza-Bolibar. Charged with a past rural atmosphere, the life in this town has always been linked to the activity of its farmhouses or baserris, which includes tasks like shepherding or growing vegetables. Since the 11th century, the peaceful Puebla de Bolibar has been the place of birth of illustrious people such as Simon Bolivar’s ancestors, to whom a museum has been dedicated in the Errementarikua baserri. The Church of Santo Tomás, dated to the 10th century, is one of the most distinctive landmarks in the town.

Zenarruza Monastery. Legend has it that on the day of the Assumption in 968, the inhabitants of Bolibar witnessed in awe how an eagle took a skull from the nearest cemetery with its talons to leave it later behind some bushes. This unexpected occurrence was taken as a divine signal and the Zenarruza Monastery was erected there. This architectural complex, built over centuries, still preserves many of its most important elements, among which we can distinguish the church, the altarpiece, the portico, and the Plateresque cloister–the only one of its kind in Biscay.

Abundant nature. Anywhere in the Lea Artibai region, nature reveals all its splendour. Evidence of human presence in prehistoric times in the area has been found in the caves of Abitxa and Erreka, in Amoroto. The courses of the rivers Lea and Artibai together with the woods and meadows that surround them are home to a large number of native animal and plant species. The summits of mountains like Mount Oiz, one of the five so-called montes bocineros or ‘horn mountains’, offer wonderful views over the sea. The coast is dominated by steep cliffs and beaches of all kinds: the peculiar Ogella, in Ispaster, whose look changes depending on the currents; Isuntza in Lekeitio and Karraspio in Mendexa, which form a single beach with the ebb near the tide mill of Manierrota; or the sandy beach of Arrigorri in Ondarroa, found on the border of the region.

Walks through history. The first of the four stages of the Camino de Santiago in Biscay–also one of the oldest routes–takes you across Lea Artibai. The Northern Way enters Biscay through Markina-Xemein and exits it 23 kilometres later, at Munitibar, after passing outstanding places like the Chapel of San Miguel de Arretxinaga, the Antxia Tower, the Ansotegi Palace, the Convent and Church of El Carmen, the Simón Bolívar Museum, or the Zenarruza Monastery. Another major trail in Lea Artibai is the Wine and Fish Route, a path that follows the roads taken in the Middle Ages by the merchants who traded the fish caught off the Biscayan coast for the wheat and the wine produced in the plateau. The same as in the past, the path begins in Ziortza-Bolibar and eventually divides into two, one of them leading to Ondarroa and the other one to Lekeitio.

Experiencing tradition. In Lea Artibai, everything follows the rhythms and cycles of nature. Life is inextricably linked to our baserris, pillars of our famed cuisine, and to the sea in the coastal towns of the Cantabrian Sea. Rural spots like harri jasotzea–stone lifting–or aizkolaritza–wood-chopping–are popular inland, while on the coast the trainera regattas steal the show. Folk dances have their own charm in Lea Artibai. We can admire the Kaxarranka and the Eguzki-dantza in Lekeitio, the Zahagi Dantza during the carnivals of Mendexa and Ondarroa, or the Xemeingo Dantza in Markina-Xemein.

Adventures for all ages. The route from Amoroto to the Chapel of Santa Eufemia at the top of Mount Urregarai, the GR-123 along the borders of Biscay and Gipuzkoa, or the easy footpaths next to the rivers Lea or Urko are good examples of the mountain trails we can find in Lea Artibai. There are plenty of attractive options for those who are looking for exciting adventures too: surfing, coasteering, kayaking, paddle surfing, scuba diving, bungee jumping on the coast, caving, climbing in search of hidden caves, hiking, mountain biking, or even target archery. There is also an adventure park in Mendexa where you and your family can climb to the tops of the trees and get the adrenaline flowing. 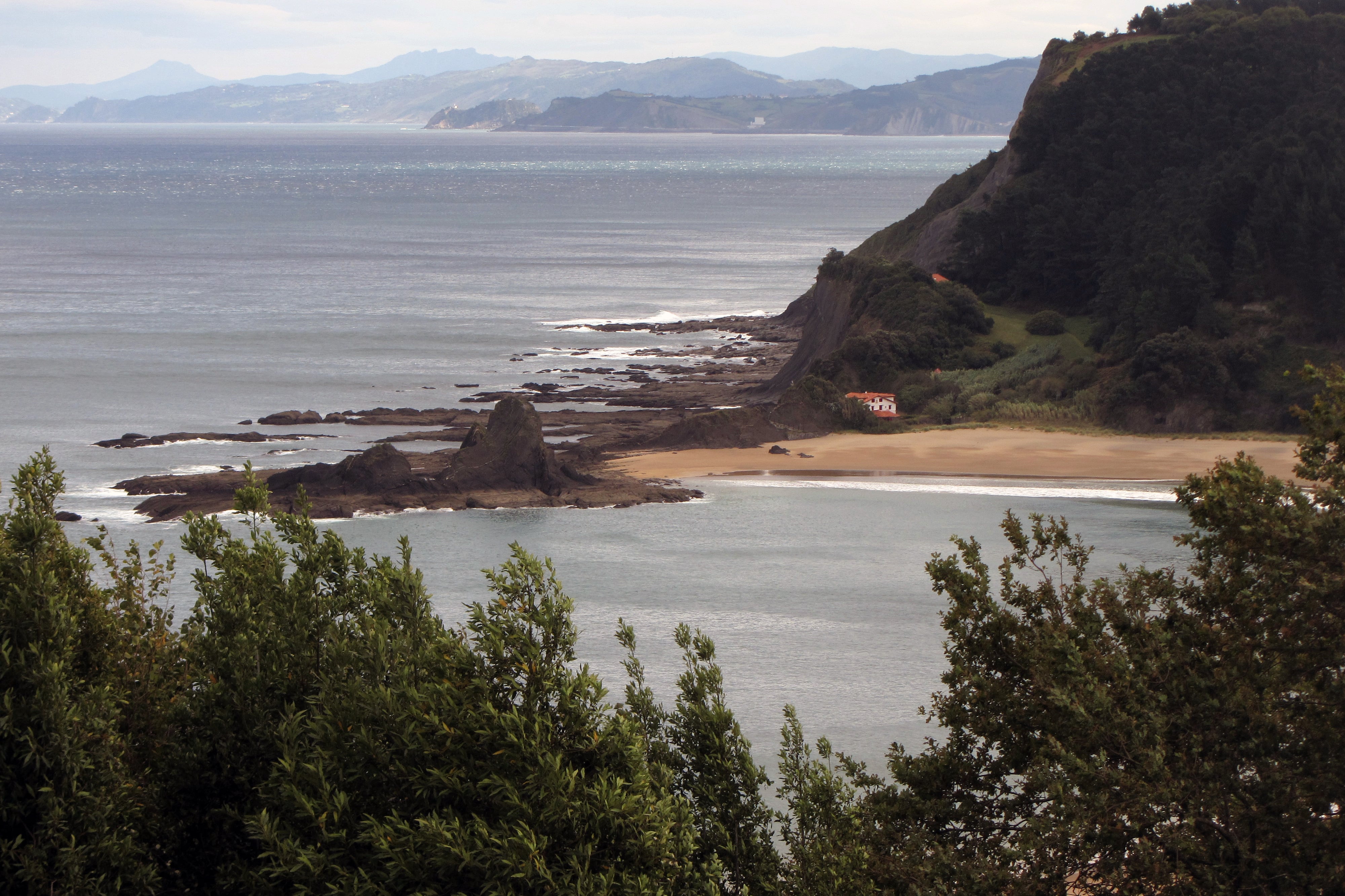