The river Nervión can give evidence of Bizkaia’s economic development. From Bilbao to its mouth in the bay, it flows through an area that has been home to shipyards and mineral extraction industries.

Throughout history, the river estuary, known as La Ría, has played a key role in the transformation of the city and the bridges crossing it have been catalysts of the city’s dramatic change.

On its way to the sea, the Nervión goes past the Uribitarte quay, the old shipyards (on the sites of the Guggenheim Museum and Euskalduna Conference Centre), the Olabeaga workshops, the Molinos Vascos building and Altos Hornos de Errontegi.

In its lowermost course, past the Bizkaia Bridge, the river flows into the Cantabrian Sea under the name of Ibaizabal (Basque word for ‘wide river’). 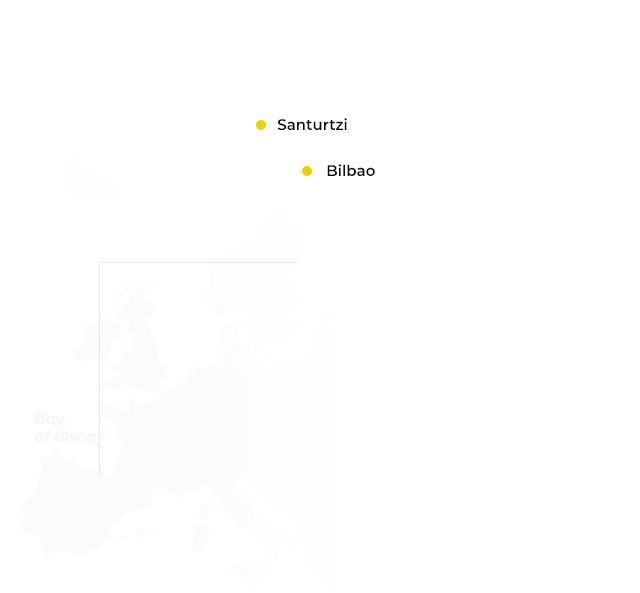 Long ago, the Arenal was the heart of Bilbao. Ships loaded and discharged cargo on its green areas, and the goods were stored on the docks. Maritime traffic moved into the Arenal and up and down the river, whose bridges were movable so as to not disrupt boat traffic while enabling people to cross the river.

The Guggenheim Museum Bilbao and the Euskalduna Conference Centre and Concert Hall were built on the site of the old shipyards as a tribute to Bizkaia’s industrial past. The Carola crane, painted in bright red and standing close to the Euskalduna bridge, was also a crucial witness of past port activity. All the bridges on the Nervión were movable. A curious anecdote: crossing the Perrochico Bridge across the Town Hall (no longer in place) cost a ‘perra chica’, as the 5 cent coin was often referred to.

On Paseo de Uribitarte there stand the old port warehouses, close to the Customs House, where customs duties were collected. The Olabeaga neighbourhood was dotted with shipyards whose workers built and repaired ships. In addition, fishing nets were fixed and freshly caught fish were unloaded from fishing boats. In 1969, the Deusto Canal opened so as to reduce traffic on the wharves of Bilbao. In Zorroza you can still see what remains of the flour mill plant Molinos Vascos, one of the symbols of Bizkaia’s industrial activity.

Next to Errontegi (Barakaldo), Altos Hornos de Vizcaya, whose furnace plant started operating in 1902, was a symbol of a thriving steel industry. Some decades later, the plant was relocated to Sestao. Near its mouth, the Nervión changes its name to Ibaizabal and passes through the Bizkaia Bridge, the wrought-iron triumphal arch of Bizkaia, named a Unesco World Heritage Site in 2006.

The estuary divides Bilbao into two halves that are perfectly connected by way of ten bridges. Follow this route on foot so that you can see all the bridges over the Ría.

In the Old Town is the San Antón Bridge, a passageway for the mules that carried iron ore and imported goods from Bizkaia to Castile.

Cross this bridge toward Bilbao La Vieja, go down the steps and take a short stroll to La Ribera Bridge. You will see the impressive La Ribera Market. Snap a picture or two before going on with your tour.

Head to La Merced Bridge, which connects the Church of La Merced, currently Sala Bilborock, with the Casco Viejo. Sala Bilborock is a concert hall and cultural centre that serves as music rehearsal space as well. From La Merced Bridge make your way to the Arriaga Theatre. Look at the Arenal Bridge brimming with people, the fabulous façade of La Concordia Feve train station and the headquarters of Sociedad Bilbaína (1839) next to it. Pay attention to these two buildings for dramatic contrasts in architectural styles.

Make your way to the Town Hall across the gardens of the Arenal and you will find the Town Hall's Bridge on the left. In the past, it was a bascule bridge that would raise the spans to provide clearance for boat traffic. Nowadays, it is no longer a movable structure. Continue your stroll along Campo Volantín toward Santiago Calatrava’s Zubizuri Bridge, whose shape resembles a sailing boat.

You are getting closer to La Salve Bridge, whose name originated in the Salve salutation prayer offered up by sailors to Our Lady of Begoña. On the bridge, a large red opening welcomes the vehicles that are making their way down to Bilbao. Leave the Guggenheim Museum behind to view the Pedro Arrupe footbridge, connecting Deusto University with Plaza Euskadi. Cross the bridge walking on its wood deck surface and take a picture of the Museum and the ripples of the river as caught by the shimmering and swirling forms of the building. Near the Iberdrola Tower you will see the Deusto Bridge, designed by architect Ricardo Bastida to connect the Deusto and the Abando districts. The Deusto Bridge is the only movable bridge that continues to be used today in Bilbao.

Continue along the Evaristo Churruca quay past the Euskalduna Conference Centre toward the Euskalduna Bridge. El Tigre building and the 60m-high Carola crane, in the docks of the Maritime Museum, used to bid farewell to the river on its way into the sea. The Euskalduna Bridge was the last to be built in Bilbao until 2015, when the city opened the Frank Gehry Bridge, named after the Guggenheim Museum architect, connecting Deusto to Zorrotzaurre. 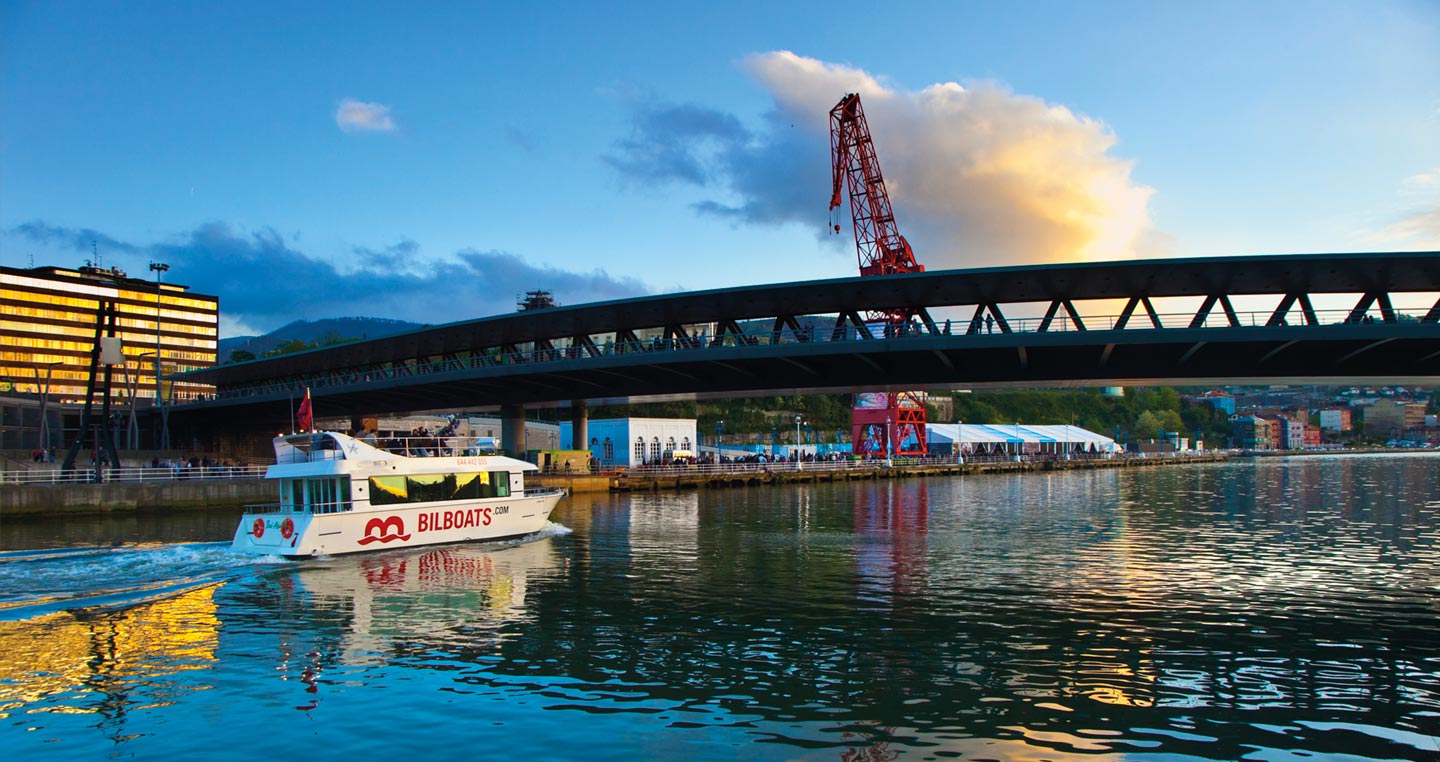 Since it is not easy to find a parking space near the San Antón Bridge, you should get here by train, bus or underground. 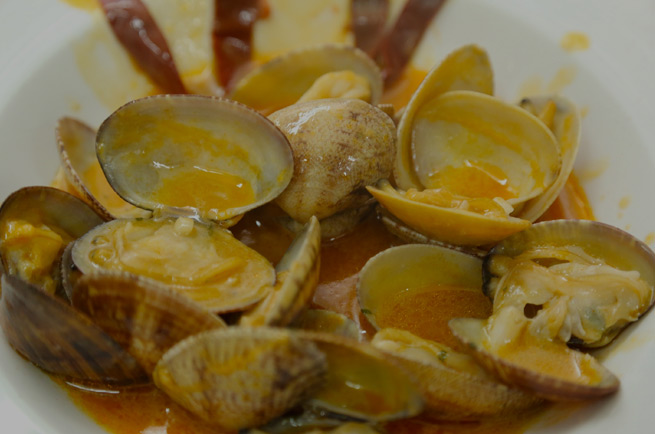 In the areas close to the Nervión you will find a wide range of places to eat. For local food, go to Calle Ribera, in the Old Town. The restaurants here serve rice dishes, creamy soups, meat, freshly caught fish, beans… Leave the Casco Viejo to find eateries offering other types of food. 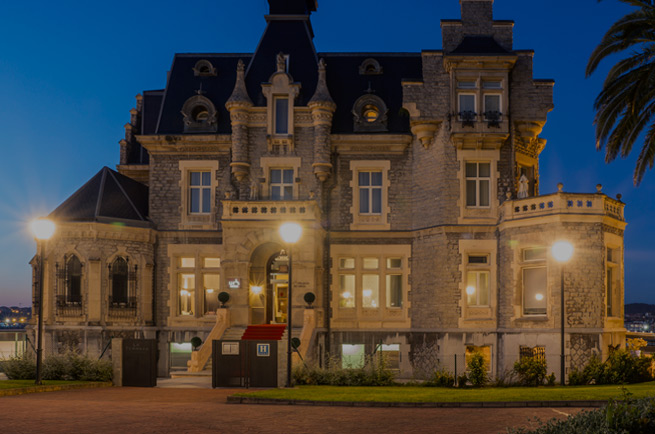 In the area around the San Antón and Arenal Bridges, Ibaiondo, hostels and B&Bs abound. They are on narrow streets in the Old Town, where out-of-towners can easily get lost. To get to your destination, check your hotel address in a street map or a GPS.

Walk away from the centre to find from budget to pricy hotels. The farther you go, the less expensive the accommodation. Whatever your choice is, book your room in advance.