A Club that connects with its region

Adopting a philosophy that no other professional team in the world has, Athletic Club have never lost their place in football’s elite since the club was founded, becoming one of the best ambassadors for Bilbao Biscay.

San Mamés, Athletic Club’s stadium, is on a par with the best stadiums in the world. Inaugurated in 1913, it is the best place to soak up the history and philosophy of the club, the heart of a passion that is shared all over Biscay.

The connection that existed between Bilbao and the United Kingdom during the industrialization in the 19th century resulted in the arrival of large numbers of British workers into Biscay. In their spare time, these workers used to play a strange ball game that was unfamiliar to the locals. At first, it was just a form or entertainment for foreigners, but the university students who came back to Biscay after finishing their studies in Great Britain took up the sport with enthusiasm, leading to the foundation of Athletic Club in 1898.

From that moment on, everything changed in Bilbao Biscay. Championships began, initiating with them a friendly rivalry between regional teams, which brought about Sunday pilgrimages to the fields where the different clubs put their strengths to the test. In the light of the excellent reception this new sport had, causing a real furore among local people, a new stadium was installed in 1913 on lands that belonged to the neighbouring shelter of San Mamés, after which the stadium was named.

Football has changed in so many aspects since the inauguration of that first San Mamés… but there is something that has always remained the same, Athletic Club’s philosophy, the hallmark of the club. Only men and women that either have been born in the Basque Country or trained to be footballers in the region from an early age are eligible to play for it. This is a completely different way to understand football, recognising the value of the players who have worn the colours of the team from a very young age, who have grown up in its youth academy, that is to say, players who have always kept the Club close to their hearts.

In spite of what one might think, this philosophy has turned out to be one Athletic Club’s greatest strengths. In their over 120 years of history, the men’s team have won the national league 8 times – being one of the only three teams that have always played in the first category – while the women’s team has done so 5 times. They have been crowned Cup champions 24 times, lifted 3 Super Cups and taken part in international competitions a great deal of times.

The strong bond between the city and the club is easy to notice as red and white flags hang from windows and balconies at any time of the year, but especially on match days. Walking along the Botxo – as the people who live in Bilbao affectionately call their city – you can see that lots of places are intimately linked to the team. An example of this is the case of the Club’s headquarters and offices, located at Ibaigane Palace on Calle Alameda Mazarredo, in the Ensanche. Also symbolic is San Antón Bridge, in the very heart of Bilbao, and the church with the same name. These are two of the city’s most historic icons, represented on the crests of both the city and the Club. The Campa de los Ingleses, on the left bank of the Estuary of Bilbao, was once occupied by a British cemetery adjacent to the shipyards and docks in which football took its first steps in Biscay. The place is now home to important landmarks like the Guggenheim Museum Bilbao, the Iberdrola Tower, the Euskalduna Palace, the Bizkaia Aretoa-UPV/EHU, the Deusto University Library, and a series of outdoor sculptures by international artists that have turned the area into a real open-air museum.

Full of symbolism for athleticzales, Athletic Club followers, –and people from Bilbao in general –, is the Basilica of Begoña, a place of worship dedicated to Our Lady of Begoña, our beloved Mother or ‘Amatxu’. Every year, Athletic Club players go there to pay tribute and offer their trophies to the Virgin. The Estuary of Bilbao, the spine of the city, is a place of reference for red-and-white supporters too. From the 80s, Athletic celebrate their titles onboard their famed Gabarra. This barge is a flat boat that, on these special occasions, sails along the estuary departing form Getxo, Portugalete and Santurtzi, getting past the Vizcaya Bridge to eventually reach the centre of the capital, while crowds of followers gather on both banks and cheer for their team. The Gabarra generally waits for future celebrations in the Itsasmuseum, next to the famous Carola Crane. Finally, as an interesting fact, guarded by three lions in Jado Square, there is a fountain that resembles the Copa Coronación, a cup won by the club in 1902.

Lezama is another must for Athletic Club’s fans, the football academy where our young talents are nurtured before getting into the first teams. From under-12 to professional players, teams in all categories train and prepare themselves for their competitions in these modern facilities, always sticking to the club’s unique philosophy and its values.

The best way to discover Athletic Club’s essence is visiting the new San Mamés, a spectacular stadium inaugurated in 2013, that was erected in the same spot as its predecessor. In 2015, it won the Sports Building of the Year award at the World Architecture Festival and in 2017, it was chosen as the best Venue of the Year at the World Football Summit. With a seating capacity of 53,331 spectators, the new San Mamés Stadium has already become one of the most eye-catching places of interest in Bilbao, especially when its white façade is lit up at night. The splendour of La Catedral –name popularly given to the stadium– and its lights can be best admired from the lookout point in Artxanda. You can take the funicular to get there, or simply walk along the quays in Olabeaga, Zorrotzaurre and Deusto to contemplate it.

San Mamés houses the Athletic Club Museoa, a recommended visit for those who want to get to the heart of the club. Some of the most symbolic elements connected to the club can be found in it, such as their trophy room or a collection of over 1,000 original items that takes visitors through the team’s history, from its foundation to the present. Plus, there are diverse exhibitions and interactive activities that allow you to know more about Athletic Club’s history and philosophy.

The San Mamés Stadium Tour gives you an incomparable opportunity to be in the changing rooms, where the teams get ready for their matches; to get into the player’s tunnel passing next to the bust of Pichichi, –Rafael Moreno Aranzadi, the legendary forward to whom the sides that play for the first time at San Mamés must offer flowers–; and to walk onto the grass of La Catedral as professional footballers do. You can also take a seat on the bench and pretend to give orders to your players, or give your view on what happened on the pitch in the press room. To conclude the visit, there is nothing like entering the Presidential Box in search of the best perspective of a stadium that matches the quality of the club’s supporters. As it could not be otherwise, people are always welcome to taste our food either at the restaurant, with a fantastic view of the pitch, or at one of the two bars of the stadium.

Without a doubt, San Mamés is at its liveliest when Athletic Club play as hosts and the stadium turns red and white. The roaring of the fans, the thrill of being so close to the pitch, the chants, the sound of the anthem over the loudspeakers, the excitement generated by the game, the sandwiches at half-time, the joy of a goal… Experiencing a match at San Mamés is absolutely matchless.

By tradition, before going to San Mamés on match days, people have to pay a visit to the pubs on Licenciado Pozas, García Rivero, and Casco Viejo, as well as to those located in the proximities of La Catedral. There, you can meet your friends or have some pintxos before heading towards the stadium as you sing together. Any bar or Athletic supporters’ club can serve as a meeting point for those who are later entering the stadium or those who just want to be immersed in such a match day atmosphere. When the game is over, the streets and bars are crowded again by the supporters that come out of the stadium. 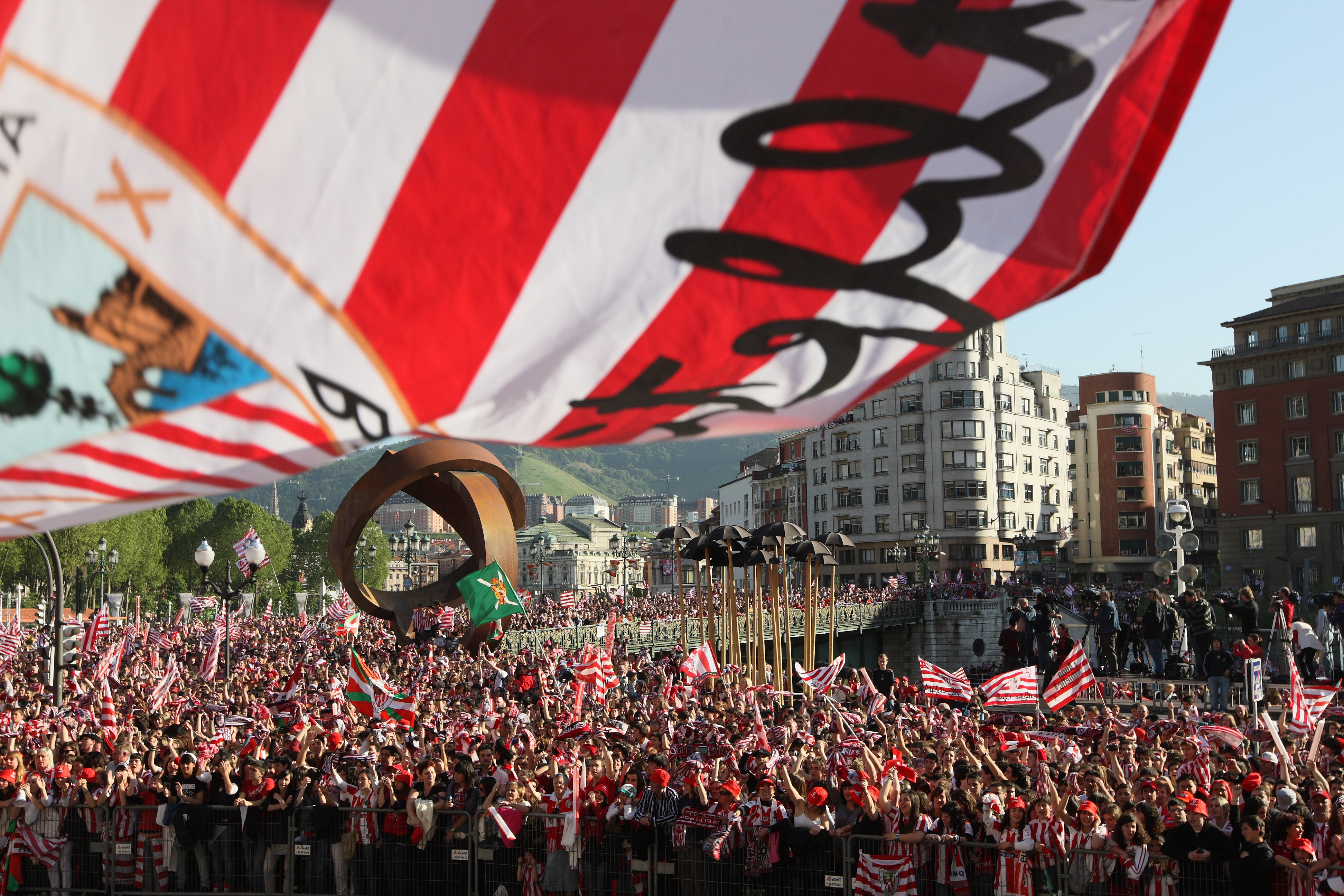