Soak up nature and history in the only town in Bizkaia with the title of city.

Orduña, 40 minutes by car from Bilbao, is a historic monumental site of great value. Like Balmaseda, it was a customs and commercial enclave of great importance during the Middle Ages, an obligatory step in Castile's trade with northern Europe.

Among its extensive heritage, the former Customs, now a hotel-spa, stands out. This emblematic building is located in the beautiful Plaza de los Fueros, the largest medieval square in the whole of Euskadi. Another of the treasures you can see in this small town is the church of Santa Maria and not far from it, the Sanctuary of Antigua.

Orduña represents the greenest and most natural Euskadi. It is a geographical island surrounded by Alava and Castilian lands. A special, unique and surprising territory.

In addition to its beautiful historic centre, Orduña stands out for being located in one of the most beautiful and impressive natural areas of our land, Sierra Sálvada and the Nervión Waterfall. It also has an exquisite gastronomic offer based on local products, adventure activities, sports, a hotel-spa... Do not miss it.

From its foundation in 1229 until the 19th century, Orduña was an important strategic enclave in the defensive field and for commercial transit. Since the 15th century, it has held the title of city, which makes it the only one in Bizkaia with this rank. Its streets are truffled with authentic heritage jewels perfect for history lovers.

If you like taking long walks through nature and breathing pure air, you are lucky because it is close to the marvellous Sierra Sálvada, of stunning beauty, and the spectacular Nervión Falls. At the same time, through the village of Orozko you can also access the magnificent Natural Park of Gorbeia, the green heart of Bizkaia.

Historical-Monumental Ensemble of Orduña. The important customs past has left its mark on the historic quarter, which has been declared a Historic-Monumental Site since 1997. All the streets converge in the Plaza de los Fueros, the nerve centre of the city and the largest medieval square in the whole of Euskadi. It is a porticoed square, an enclave for the marketing and taxation of goods in transit between the plateau and the sea of products such as wool, iron, grain, fish, tapestries, triptychs and altarpieces.

Sanctuary of La Antigua. The Virgin of Antigua is the patron saint of the city and the valley. The "Amatxu" has protected the inhabitants of Orduña since the Middle Ages and that is why the "otxomaios", the fiestas of Orduña, are celebrated every year in her honour. This is a territory of ancestral beliefs and the passage of mythological creatures. Herensuge, a kind of seven-headed snake dragon that left a trail of fire and horror in its wake, lurked along its paths. Between its streams, the lamias, half woman half animal, combed their beautiful hair and the goddess Mari flew towards Mount Txarlazo (927 m.), the emblematic summit of Orduña.

Villages of Rurazabal - The oak of Orduña. Four villages together with the city form a community with its own entity, the Junta de Ruzabal (Lendoñogoiti, Lendoñobeiti, Mendeika and Belandia) located at the foot of the Sierra Sálvada. Its amazing landscape awaits a valuable heritage made up of farmhouses, hermitages, mills and temples.

In 1516, under the shade of an oak tree, as it has been done since time immemorial, the Board of Ruzabal met, this time leaving its laws in writing. As in Gernika, although its history is less well known. In fact, the current Orduña oak is Gernika´s tree sprout.

Nervión waterfall and outdoor activities. The river Nervión is born in a spectacular waterfall that flies 270 meters in free fall in the months of rains, in winter and in spring. Moreover, this phenomenon can be seen from a viewpoint near the port of Orduña. In addition to hiking, mountaineering or cycling, in this area you can take part in flying activities such as paragliding or hang-gliding with the panoramic view of the Sierra Sálvada.

The "bollo" of Orduña. This is how the locals know about this atmospheric phenomenon that takes place in winter. With anticyclonic weather and clear skies, fog accumulates in the Losa Valley (Burgos) due to the effect of thermal inversion. The southern wind gently slides this fog like a gigantic cascade of clouds towards the surrounding valleys. If you come at this time, don't hesitate to take the camera with you and hope to be lucky enough to be able to immortalize it.

In addition to the essential visit to the Nervión Waterfall, we propose you a route by car through the Sopeña, from Ruzabal to Maroño with the Sierra de Sálvada as a backdrop. This is a route to do preferably on clear days.

The route begins in Orduña, from where we will have to take the A3931 road towards the Sanctuary of Antigua, which will take us to different villages. If we want to visit Lendoñogoiti and Mendeika we will have to detour.

We recommend that you visit the mill of Lendoñobeiti and the hermitage of Poza, place of origin of the Licenciado Poza.

If you feel like complementing it with a short walk, we encourage you to go from Lendoñobeiti to Lendoñogoiti walking or once you reach Mendeika continue to Babio, where you can enjoy the views to Ayala. 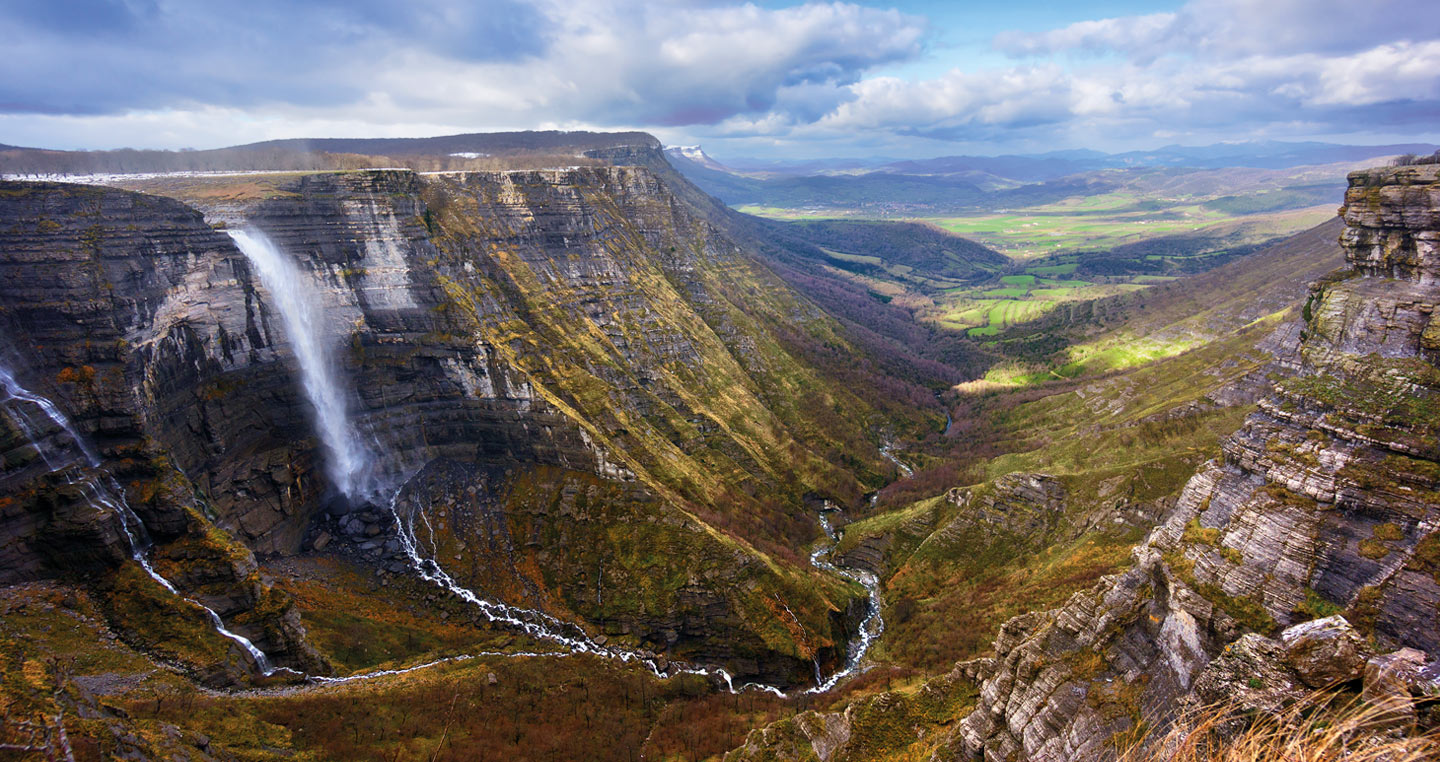 Orduña enjoys an excellent location as a tourist destination just 40 kilometres from Bilbao and Vitoria-Gasteiz. You can get to Orduña in several ways. As well as by car, it is a good option to arrive by train because there is no traffic and it leaves you in the centre. 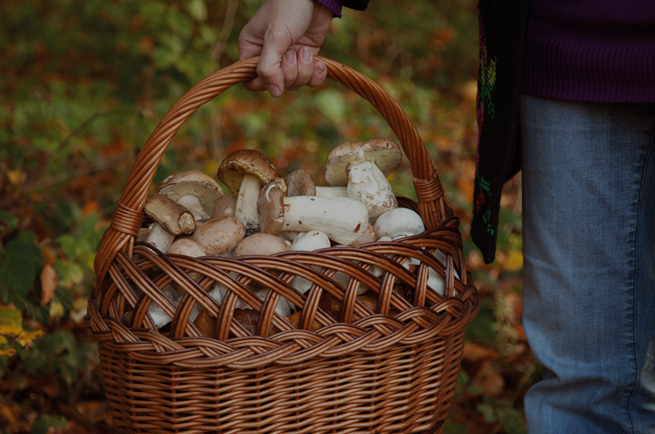 "Calocybe Gambosa", the perretxiko, is the most appreciated mushroom in the gastronomy of this land. The "revuelto de perretxikos" (scrambled mushrooms) is typical in Orduña. It is no coincidence that it is also known as Orduña mushroom. It is an obligatory dish in the menu of the patron saint festivals, otxomaios. A must if you visit this land in spring, especially in May. You can try it as a dish in a restaurant or in a pintxo in one of the bars of the historical case.

Organic production is also very common in Orduña. Its eggs, meat and vegetables are among the most recognized as well as the dish of snails. If you are interested, we recommend that you visit the Urduñako Zaporeak Local Product Market. It is held every first Saturday of every month in the Plaza de los Fueros. Here you can enjoy Orduña's own flavours as well as get to know the local producers first hand. 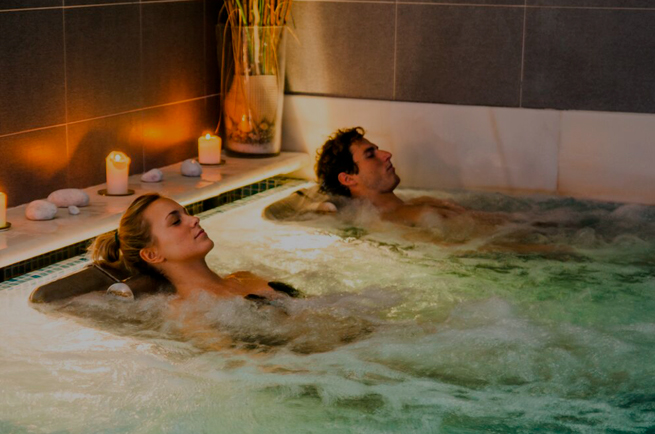 If you want to live a relaxing experience, we recommend that you visit the spa hotel of Orduña. It is located in the heart of the old town, specifically in the Plaza de los Fueros, and is a neoclassical style building with great architectural historical value.

In addition to the spa hotel, you have more accommodation options at your disposal. For example, you can choose between staying in holiday apartments and guesthouses in the very centre of Orduña or opt for a rural house with family and/or friends to enjoy the natural surroundings of the Sierra Sálvada.