The green, rugged heart of Bizkaia

Halfway between Bizkaia and Álava, Gorbeia Nature Park is the largest nature reserve in Euskadi.

Spanning 20,000 hectares, Gorbeia Nature Park is a favourite with Basque mountaineers. The soul of the park is Mount Gorbeia (1482m), on the border with Álava. The summit is crowned by the Gorbeia Cross (17m in height), which attracts thousands of hikers and mountaineers every year.

The landscape is wonderful, and the park has a sentimental value and a deep cultural meaning to Bizkaia’s people. Gorbeia Park is a centre for hiking, climbing, abseiling, caving, mountain biking and horse riding. Its trails are clearly marked. The park has two visitor centres where you can learn everything about this protected natural area. 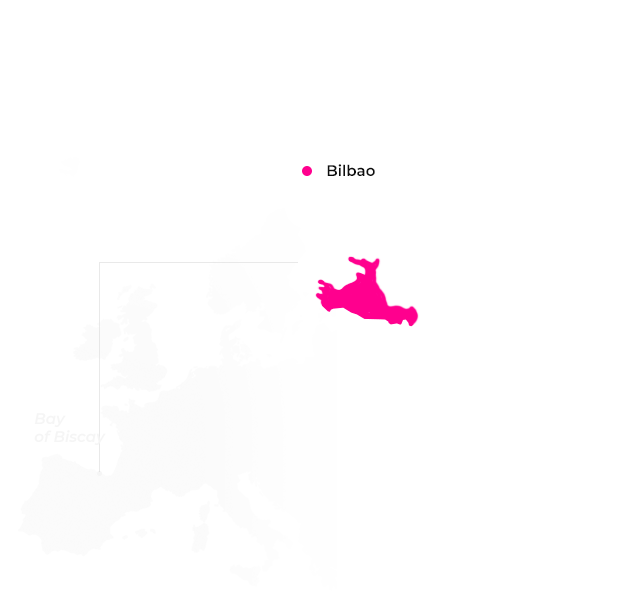 The Gorbeia massif has a deep meaning for Vizcaínos. It is part of the Basque Mountains and is closely linked to Bizkaia’s history, as it is one of the five montes bocineros (horn mountains), from which the General Meetings of Bizkaia were summoned using bonfires and horns.

In Gorbeia, you will find many different landscapes: rugged mountains, rolling greeneries dotted with magical oak and holm oak forests, and a karst scenery that accommodates nearly 500 caves and caverns. The landscape is crossed by crystal-clear rivers and springs whose sounds speak of legends and mythological characters. The sources of the rivers Bayas and Zubialde are to be found amidst the woods. Shepherds and their sheep have used this pastureland for centuries. The Latxa sheep, whose milk is used to make Idiazabal cheese, graze on the Gorbeia land, covered with young tender grass.

The Itxina Protected Biotope and the Gujuli waterfall (100m high) are the top attractions. A maze of potholes and caves cut through the Itxina massif, in Orozko. The landscape is particularly magnificent in autumn, when the beech trees’ leaves turn red.
The main entrance to the Itxina massif is Ojo de Atxular, a fabulous geological formation at an elevation of 1100m in the karst land. Of the numerous caves, Supelegor stands out. The goddess Mari lives inside the cave. Lamias and basajaun (mythological chimeras and hominids, respectively) were said to dwell in these hollows in the earth, while sorgiñas (witches) held meetings sitting around a bonfire at the entrance of the cave.

As to the park’s fauna, it consists of deer, wild boars, minks, badgers, wild cats and birds of prey. On the road you will see grazing cattle and sheep as well.

The Park offers numerous routes, the best-known being the hiking route in the Gorbeia Mountain from the Pagomakurre recreational area. Vizcaínos gather at the foothill to climb up the Gorbeia on 1 January every year, a tradition that has been kept alive over time. The Gorbeia Mountain can be reached from Areatza, a 30 minutes’ drive from Bilbao, on road N-240. At the centre of town, take a detour on the asphalt track that leads to the recreational area of Pagomakurre. Park your car there. The 12km hiking trail is easy and clearly signposted. For a two-way hike, allow 4 hours.

To climb to the top of the mythical Gorbeia, take the usual route departing from Pagomakurre, in Areatza

In Pagomakurre, take the broad path that leads to Arraba. Make your way through the pass of Arrabakoate. Walk across the pastureland and past the shelter of Elorria (Basque Mountaineering Society).

Continue along the path beneath the crag of Gatzarrieta on your search for the pass of Aldape, which opens to the basin of Egiriñao, at the foot of the mountain. Soon after, you will come across the shelter of Egiriñao and the tiny chapel of Virgen de las Nieves.

The path goes through the hill of Aldamiñoste, which sits between Gorbeia (1482m) and Aldamin (1378m). Walk past the spring of Lekuotz and start climbing the thoughest -and the final- uphill stretch. At the summit, you will find the emblematic Gorbeia Cross and a bronze statue of Our Lady of Begoña.

The first cross was set up in 1899 and has been replaced more than once since then. The third one, 17m high, resembles the Eiffel Tower. Actually, you will be standing at the highest peak in Bizkaia. Take a selfie by the cross and enjoy the spectacular views of Udalaitz, Mount Anboto, the Aizkorri massif and the town of Orduña. 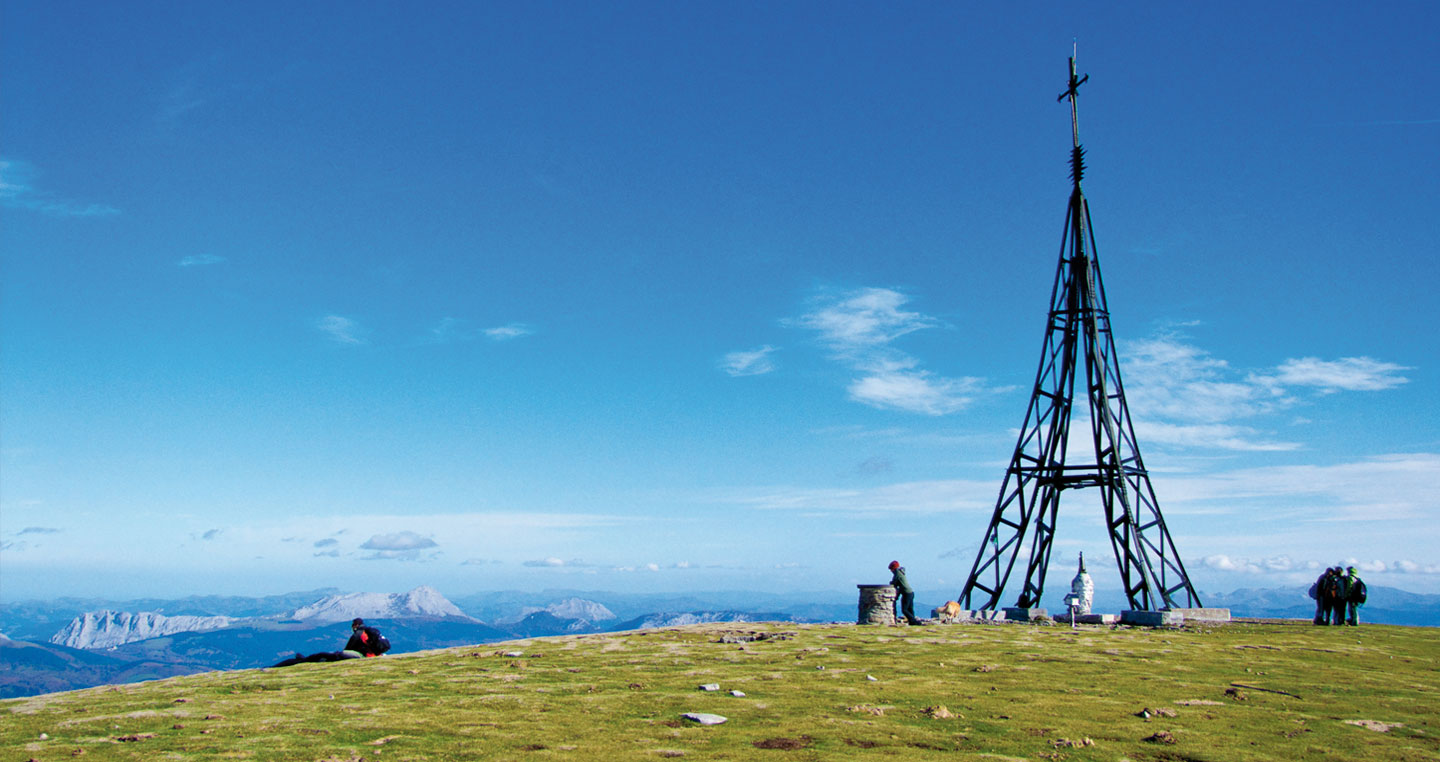 Situated in Álava and Bizkaia, Gorbeia Nature Park can be accessed by way of any of the roads that link Bilbao and Vitoria-Gasteiz. Road N-240 borders the park on the east, while road A-624 (up to Ziorraga), regional road BI-2522 (from Ziorraga to Llodio) and highway A-68 do so on the west. Road N-622 reaches the park from the south. Local road BI-3513 (from Orozko to Artea) is the perfect way to get to the park if you are coming from the north. 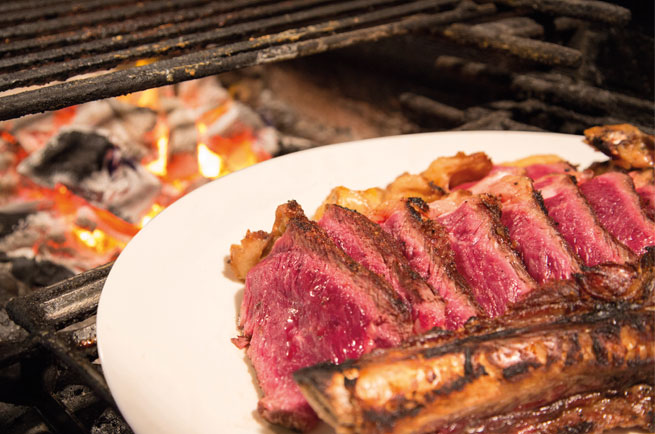 The park has a lot of picnic areas in unrivalled natural settings. Bring a bottle of water and something to eat to regain strength during the walk.

If you prefer to sit at a restaurant, get back to your car after walking around the park and drive to one of the nearby towns. There, you will find restaurants, cider houses, baserris (farmhouses) and grill houses where they serve the best of our traditional dishes. Our recommendations: charcoal-grilled meat with Gernika peppers, txuletas al kilo (steak by the kilo), alubias con todos los sacramentos (bean and chorizo stew), and Idiazabal cheese with quince cheese. 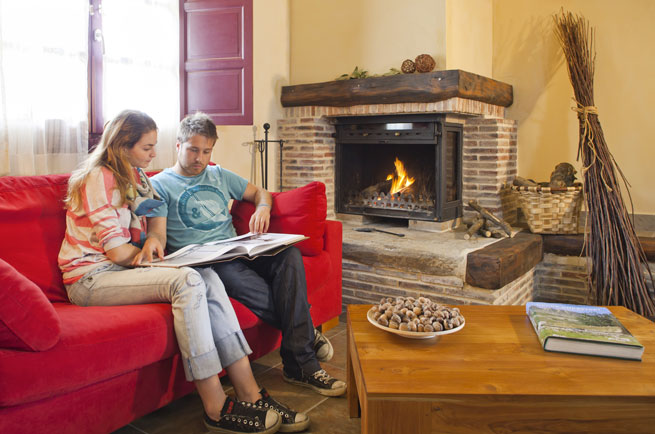 You can spend the night in the park, where there are shelters. Make your booking in advance.

For more formal accommodation, go to any of the nearby villages: Zeanuri, Orozko or Zeberio, where you will find lodges and country houses to stay. If you stay in the area, you can follow other routes on the following day.