Discover the historical and natural splendour of Orduña

Orduña, the gateway to Biscay for centuries, keeps the grandeur of its glorious medieval past

Its strategic location between Araba/Álava and Burgos turned Orduña into an important commercial hub in the Middle Ages. Having its own privileges and customs, goods of all kinds transited its streets and the city was well-known for hosting one of the most important fairs at the time.

As a result, the only official city in Biscay has an exceptional monumental and historical heritage, surrounded by a truly unique natural landscape dominated by the Sierra Sálvada.

Among the different types of local governments existing in Biscay, we can find seven villas, plenty of towns or pueblos and anteiglesias, but just one of them is officially recognised as city or ciudad. Lying between Araba and Castille, next to the River Nervión and at the foot of the Sierra Sálvada, Orduña is the only city that can be considered as such. Founded in 1229, this municipality, strategically situated in between the coastal territories and the plateau, was one of the main commercial hubs of the region. Here is where our ancestors traded the wool, wheat, vinegar, and wine that would be shipped from the ports of the Cantabrian Sea, for the fresh or salted fish that was brought from the Biscayan coast.

Bearing testimony to the city’s mercantile dynamism and to the countless fairs that have been held in it for centuries is the spectacular Plaza de los Fueros, the largest medieval market square in the Basque Country and a symbol of how relevant Orduña was to the trade sector in Biscay. Declared Conjunto Monumental in 1997, its historical centre extends around this beautiful square – with its arches and the paintings on its ceilings, done by different artists – and contains some of the most representative buildings of the city.

One of the most emblematic places in Orduña is the Aduana, a neoclassical 1792 building that features thirteen semicircular arches. The taxes and duties on the goods that went through the city were paid there and part of this money was spent on the maintenance and improvement of the Calzada Real – the road muleteers followed while carrying all kind of products with them. After the Aduana stopped being used as a customs house, it served as an army barracks and a workshop school, to end up being the modern spa hotel we can see today.

Behind the Aduana, to its left, is the Palacio Olaso, a neoclassical palace with a beautifully ornamented entrance. It is located in the same position once occupied by the gate of the former medieval wall, which once surrounded the fortified city and whose remnants can still be found all around the historical centre. The distinctive arches of the renaissance palace Palacio Mimenza stand out to the right side of the Aduana, while the 17th-century palace Torre Palacio Casa Consistorial, which is attached to the only remaining tower of the four that the wall connected in the 13th century, endures on one of the corners of the Plaza de los Fueros. To its right, the Portal Oscuro keeps giving us access to the original core of the city and, standing opposite, the Palacio Díaz Pimenta o Zaldibar is an extraordinary example of a Baroque palace in Orduña.

Also Baroque in style is one of the most outstanding monuments in the square, the Sagrada Familia, on whose façade we can see the family coat of arms of one of its major patrons, Juan de Urdanegi. The various emblems of the Jesuit Order and its series of Baroque altarpieces, one of the most important collections in the Basque Country, stand out on the inside.

Leaving the square, we can still see the remains of the 1.8 km wall that protected the city, which was only accessible through one of its seven gates in medieval times. Next to them, there is also a rectangular fortified defensive structure built with masonry. The imposing Gothic church of Santa María de La Asunción, almost entirely built between the 16th and 17th century, bounds this construction on one of its sides. In its bell tower, fragments of the original masonry can still be distinguished. Its interior is worth visiting so that you can appreciate not only the Gothic architecture, but also the Renaissance style found in its chapels’ railings or the Hispano-Flemish style of the altarpieces. The ceiling of the apse is also covered with Renaissance paintings. Next to the church is the Palacio Ortés de Velasco o de Arbieto, a building with a military design that dates back to the 16th century and was once attached to the wall too.

Outside the former walled city, occupying the space on which the earliest settlements in the region were established, we find the Baroque Sanctuary of Nuestra Señora de La Antigua. Built in the 18th century, the present sanctuary is not the first temple to have existed on that particular spot. Inside it, there is a wooden statue of Our Lady, the revered patron of both Orduña and Arrastaria. The image is almost one metre tall and is on display at the altarpiece dedicated to La Antigua, a magnificent example of a neoclassical altarpiece made in 1805. It is no wonder that the altarpiece at Nuestra Señora de La Antigua, the late Gothic altarpiece dedicated to St Peter at Santa María de la Asunción, and the collection of baroque altarpieces at the church of the Sagrada Familia have been designated Bienes de Interés Cultural or Cultural Interest Assets.

The spectacle of nature

In the vicinities, each of the small hamlets that belong to Ruzabal have their own personality. They preserve their rural lifestyle and traditions as well as important heritage assets such as farmhouses, churches, chapels, and mills. The natural environment in which they are situated is perfect for outdoor activities. Walking, hiking, cycling, climbing, paragliding, hang gliding, caving, or even playing golf… these are a few of the things you can do while you enjoy the panoramic views of the northern steep slopes of the Sierra Sálvada. A good way to get to know the area in depth is travelling around it by car or by bike. Starting in Orduña, one of the local routes takes you past the Santuario de La Antigua, goes through the four historical hamlets of Lendoñogoiti, Lendoñobeiti, Mendeika and Belandia, and finally gets to Maroño. On your way there, you will go past the churches of San Esteban, San Pedro, San Miguel, and Santa Eulalia de Belandia, as well as the Alto de la Junta, the place where on 4th May 1516 the representatives of these four hamlets gathered under an oak, as it was done in Gernika, to draft their own laws. There are also peaceful recreational areas where you can rest along the road. A road that sometimes forks into several footpaths, such as those known as Gartxeta, La Choza, Korotze, Buribio and Babi Txarlazo. If you choose to follow the latter, you will be taken to the summit where the monument to Our Lady of La Antigua, built at the turn of the 20th century, dominates the valley.

The Salto del Nervión, the largest single drop waterfall in the Iberian Peninsula, with a height of 270 m, is a must-see in Orduña. The water acquires the singular shape of a horse’s tail as it falls, offering an unequalled natural spectacle, especially during the rainy season and the thaw.

If you want to have the best panoramic views over the waterfall, the Delika Canyon and the valley that opens at its foot, there is an easy circular walk you can do. Across beech forests, this particular path takes you to the Mirador del Nervión, at the edge of the precipice, where you can see the waterfall in all its beauty. You can extend your walk if you want to get to two nearby lookout points over some other impressive waterfalls in the area, Gujuli and Salto de San Miguel.

The beech forest of Mount Santiago, the ascent to Iturrigorri, the Goldetxo spring, the Delika Canyon, the Tertanga Cliffs, or the massive Fraideburu… Orduña and its surroundings provide an ideal setting to appreciate the beauties of nature. 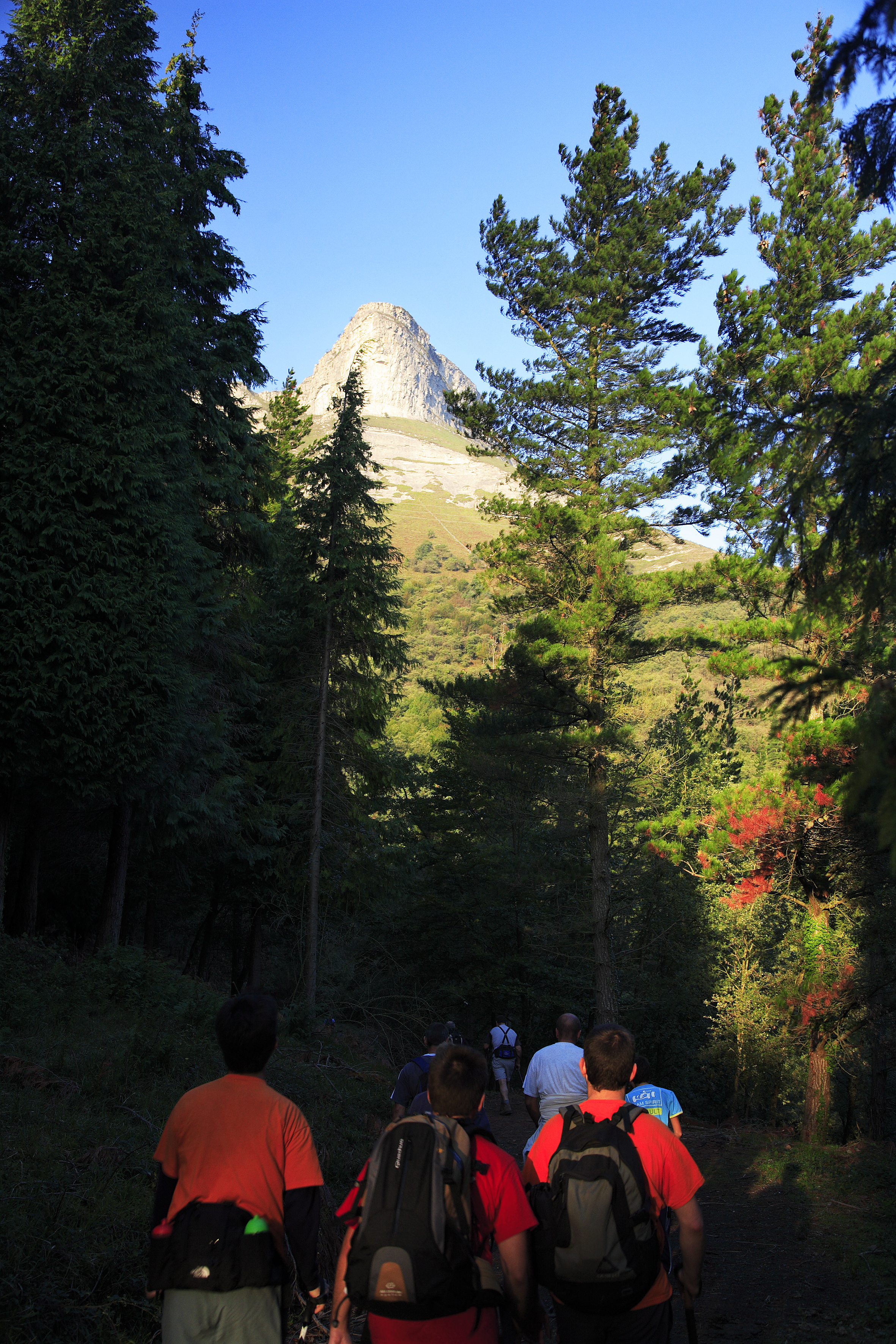