Durango: Living history in the shelter of the mountains

In the heart of a beautiful valley, crossed by the river Ibaizabal lays Durango, with a vast historical and cultural heritage of the most stimulating.

Mountains and rocks embrace this medieval old town dated more than 700 years ago. It is located in the southeast of Bizkaia, near Urkiola Natural Park and on the slopes of the mythical Mount Anboto (1331 m), home to the goddess Mari, a fundamental figure in Basque mythology.

Durango is a strategic place since it is located in the geographical centre of Euskadi, making it well connected with Bilbao, Donostia-San Sebastian and Vitoria-Gasteiz and only half an hour from the nearest beach.

In addition to being located in one of the most beautiful areas of the Basque Country, Durango is a reference point for Basque culture where you will get in touch with our ancient language, Euskera. 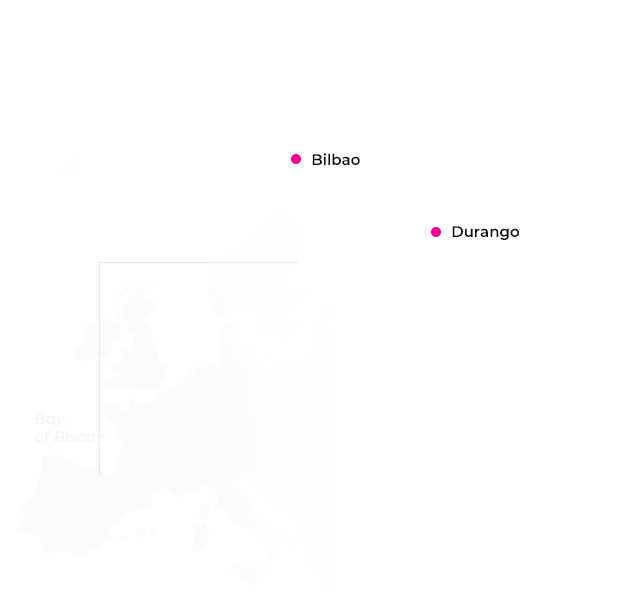 The historic centre of Durango has been declared a Monumental Site (14 January 1997). Wandering through its streets you will be able to contemplate the monuments and pieces that made up its vast historical heritage as well as enjoying the always lively atmosphere of its streets. As soon as you enter its medieval quarter, you will be caught by the history of this old town. Come and take a walk with us!

The walk through the historic quarter starts from the arch of Santa Ana, the last surviving of the six gates of the wall that protected Durango in the Middle Ages. Pass under its arch and stop at the church in the square of the same name. Its walls have so much to tell. It is located in the same location where a 15th century church was located. In 1973 the old temple was destroyed. Fortunately, in 2009 the church was raised again and thanks to the architectural works that were being developed, the vestiges of the first building of the city were found.  Before continuing, if we leave the church and turn left, we will come across the imposing Lariz Tower.

It is said that in 1483 Isabel the Catholic spent a night in this 15th century Renaissance urban palace. The building was transformed into a prison during the second half of the 19th century and it is in 2009 when it recovered its medieval appearance. However, if you look closely, in the lower part you can still see the marks of bars.

The next stop will be at Durango Town Hall, with striking paintings on its façade, inspired by "La Comedie Française". The town hall was built in the 14th century but had to be renovated due to the damage it suffered during the bombing in 1937.

If you want to get to know the origin and history of Durango in depth, nearby you can access the Museum of Art and History, located in the Etxezarreta Palace, a place where modern art and history come together in an exquisite way. Inside, among other works, it is worth observing the model of the town of Durango in the 15th century and discovering the passage of time.

As you go along the street, by your left you will see the San Agustin Cultural Centre, an exhibition hall that offers an infinite number of shows. A few steps ahead you will reach the heart of Durango, Ezkurdi Square, the epicentre of social life and the festive atmosphere of the town. There is nothing missing from this square: the Euskotren station, the musical kiosk or the pelota court. You will also see a great number of elegant bourgeois constructions, the arrival of the railway brought money to the town and the wealthy bourgeois built their houses in this area.

If you want to rest for a while, we recommend that you enter Plateruena Kafe Antzokia, with a wide cultural programme and a cafeteria where you can have lunch. This is the right place if you want to enjoy a concert or theatre later at night. Both this venue and Landako gunea host most of Durango's cultural shows. In fact, Landako Gunea, holds every December the popular Durango Book and Record Fair or Durangoko Azoka, the most important cultural fair in Euskal Herria.

After discovering these spots, we will continue the route until arriving at the Basilica of Santa María de Uribarri, National Monument, and one of the most impressive works of Euskadi. Its portico is the largest in the Basque Country. You cannot leave without going inside, which deserves a slow visit, such as the spectacular altarpiece of the High Altar. The basilica was also a victim of the 1937 bombardment. With the exception of the apse and the choir, it was razed to the ground. The Choir, in the Catholic Kings style, is the oldest original element of the church.

Footprints from the bombing

March 31st, 1937 at 8:30 a.m. Durango is going to live its most tragic historical moment. The bombs of the fascist aviation, more than four tons of explosives, massacred the village during the morning and afternoon destroying completely some historical buildings and bruising other structures. The "Space for Memory" is a monument erected to remember and pay tribute to the victims of this terrible event. Many citizens lost their lives, the bombing happened when they were at mass or market, immersed in their daily tasks. Today you can still see the traces of shrapnel left on the façade of the Garai Palace on Kurutziaga Street.

“Aztarnak” (Footprints) is a guided tour offered by the Tourist office that will extend this information about the bombing of Durango. If you get to the Tourist Office, take the opportunity to observe the building where it is located, the Kurutzesantu Museum. Protected inside, it stands the 15th century Kurutziaga cross. A Gothic transept of extraordinary beauty that holds the category of Artistic Historical Monument.

Now, go ahead, going through Kalebarria (Calle Nueva, in Basque). On the left, you will find the Bizenta Mogel library. Her name may not ring a bell, but Mogel is considered the first woman to publish her texts in Basque.

Be careful if you wander up and down the street, lest you come across a heifer. During the festival of San Fausto, around October 13th, a heifer is released with a rope tied around its neck in order to take it to Plaza Santa Ana. On the way, you will see a sculpture dedicated to the 'sokamuturra' (tradition in the festivities of some Basque villages in which they play with heifers and young bullocks).

After your run in front of the heifers, we recommend you take rest in Pinondo Square and enjoy the beautiful view of the Mañaria River. This is an ideal place to take photographs of the sculpture of Pablo Pedro Astarloa, the cross and the Monumental Fountain.

From this point, you will immediately see the spectacular arch of Santa Ana and just eight minutes far from here, the church of San Pedro de Tabira. According to local tradition, this is one of the oldest churches in Bizkaia and is located on the site supposedly occupied by a previous medieval church. 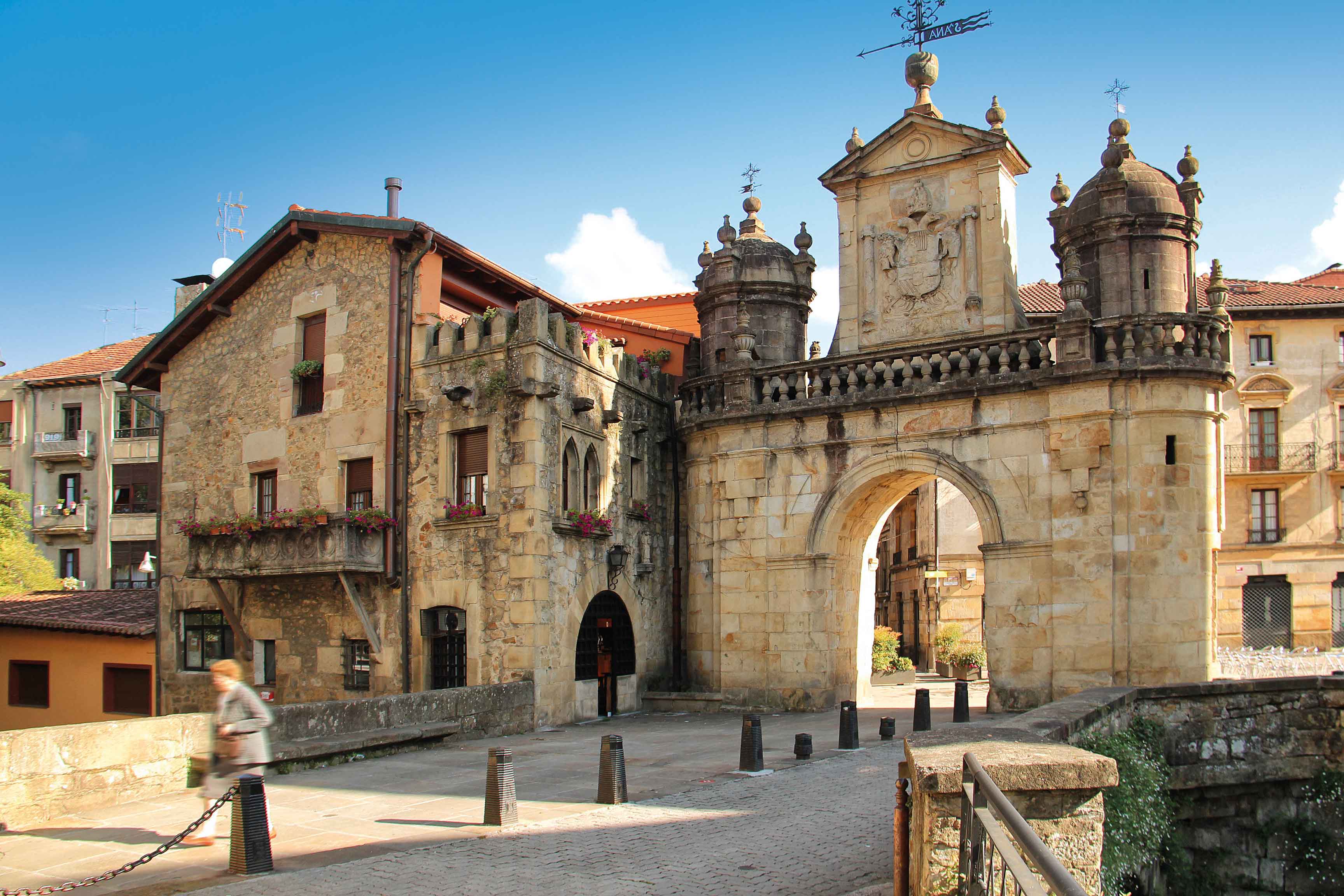 How to get here

Durango is an emblematic town in the interior of Bizkaia. It is very well connected with the rest of the Basque capitals both by public transport (buses, train) and by private transport as the roads are well conditioned. 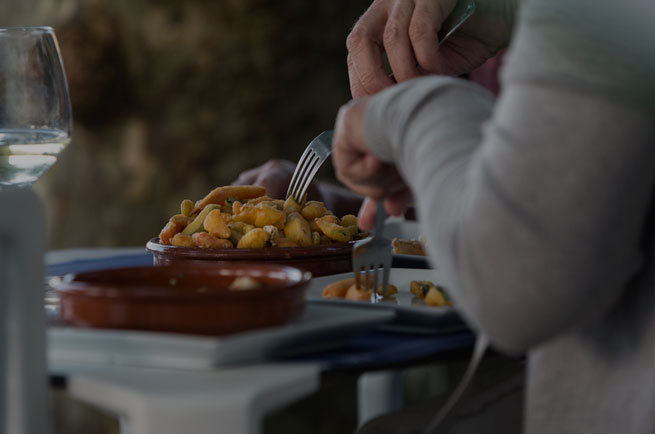 Durango has a large and delicious gastronomic offer where you can eat; from elegant restaurants, rotisseries where the euskal okela (meat raised in Euskadi) stars succulent menus or little bars in the streets. In Durango, the streets are full of life and people, so we recommend that you take advantage and give yourself a tribute, try Durangaldea's txakoli and the rich pintxos of its bars, that miniature snack that condenses the essence of Basque gastronomy. 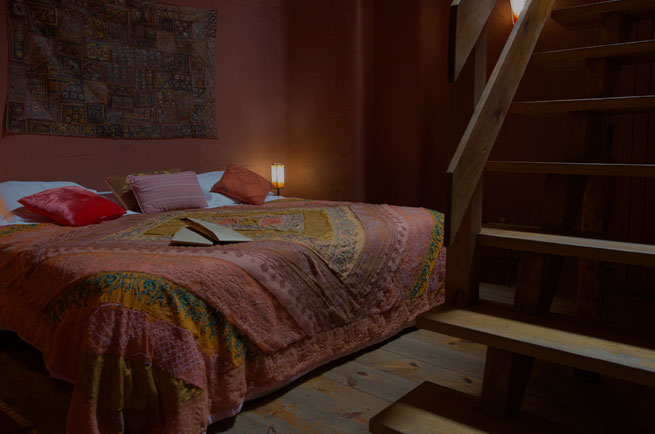 Durango has a varied offer of places to stay. From hotels and rooms in the medieval old town as submerged in the middle of nature in the Natural Park of Urkiola in a rural house.