Bilbao in one day: the essentials

Passion for art, gastronomy and avant-garde with a large dose of authenticity. This is Bilbao. Write down!

The Guggenheim Museum placed Bilbao in the international spotlight, but the city has much more to offer you. A city that, with nearly 350,000 inhabitants, surprises by its exquisite blend of tradition and avant-garde, a magical combo that can be breathed in every corner of the city, standing out mainly in art and gastronomy.

In addition to being the capital of Bizkaia, the town or 'botxo', as it is lovingly known among its inhabitants for being located in a valley, is one of the most modern, cosmopolitan and authentic cities in southern Europe. A city that takes care of its past without losing sight of the present and with its eyes fixed on future opportunities.

It is difficult to appreciate all the flavours of Bilbao in a day but, if you don't have a lot of time to visit it, we propose you a complete 24 hours route so that you can get to know it like a Bilbao citizen resident. Would you like to go for a walk?

Without a doubt, the ideal starting point for your day in Bilbao must be the Old Quarter (Casco Viejo), the historic heart of the city. We recommend you to start the route from Plaza Unamuno, as it has its own underground exit and is just 100 metres from the Euskotren train station. In both cases, the stop is called Zazpikaleak/Casco Viejo.

Starting from the unique square dedicated to the philosopher and writer Miguel de Unamuno you will see the different streets that give access to the streets known as 'Siete Calles' (Seven streets). In one of the liveliest areas of the city, strolling through these streets will bring you closer to the most original and traditional Bilbao. That Bilbao that still survives the avant-garde. With small local shops, bars and taverns full of pintxos, restaurants with traditional food, and beautiful historical buildings.

You will soon find part of its architectural wealth: the John Palace, also known as La Bolsa Building, in Pilota street, the Bidebarrieta Library in the namesake street, and the curious Fuente del Perro Fountain. Did you know that his spouts are actually lions? Walking through all the streets is worthwhile and won't take you long. Ah! During your walk remember to look at the mythical pavement tile. You will be surprised to learn that its characteristic drawing, with its flower shape and four canals, aims to avoid water accumulation on rainy days.

AFTERNOON: A walk through the 21st century's Bilbao

After doing the route it will be time for lunch. If you want to eat a traditional dish, between the streets Txakur kalea and Santa Maria you will find several restaurants with a very appetising offer. On the other hand, if you prefer to eat some pintxos, we recommend you to go to the Plaza Nueva or enter Mercado de la Ribera, of the the largest covered market in Europe, where there are probably some of the best pintxos in the city. Anyway, whether you decide to eat here or not, it's worth a visit.

After noon it is time to leave the Old Quarter. On the way out, towards the Arenal (old inner beach) you will find the majestic Arriaga Theatre, inaugurated in 1890 and rebuilt several times after fires and floods. Take a few minutes to contemplate it. From there you can start the walk along the symbolic river estuary,  whose waters, once left behind the city, serve as a border to separate the two banks of the so-called Gran Bilbao, the metropolitan area: the right coastal bank and the left industrial bank. You will soon realise that Bilbao is a city full of bridges. In fact, there are a total of 14 throughout the course of the estuary.

From the Arenal, in about five minutes you will reach the Town Hall, where you will find the Variante Ovoide monument designed by the renowned Basque sculptor Jorge Oteiza. From that point onwards, you will see how Bilbao's appearance is being modernised at every step you take. First example of this is the famous white arch Zubizuri bridge (white bridge in Basque) designed by the architect Santiago Calatrava. Once you arrive at the bridge area, if you want to enjoy incredible views of the city and a quiet walk through nature, you can take the Artxanda funicular and go up to the viewpoint. The ascent will take you three minutes. If on the other hand you want to continue the route through the city, we invite you to cross it to reach the futuristic Isozaki towers and continue along the Abandoibarra esplanade, following the river estuary road from the other side.

Although it needs no introduction, in a few minutes you will reach the Guggenheim Museum, one of the city's great attractions. This museum of contemporary art, designed by Frank O. Gehry, is shaped like a boat and is made of limestone, glass and titanium plates. It also has two beloved pets: Puppy, a watchdog made of flowers in the front; and the giant nine meter spider 'Mom' in the back. Both works have been made by Jeff Koons and Louise Bourgeois, respectively. Even if you don't come inside the museum, you can take a walk around and hopefully watch the Fire or Fog Fountain show on the bridge that is repeated every hour.

Nearby you will find the tallest building in the Basque Country, the Iberdrola Tower. On weekends and public holidays, you can go up to the 25th floor, 115 metres high. Following the route, you will access the Doña Casilda Park, the city's green lung. Here, in addition to the Bilbao Fine Arts Museum, you will find large green fields to rest in, and a pond in the centre where a good number of birds live. Among them, the most numerous are the ducks, which is why in popular culture the park is also known as Parque de los Patos (Ducks' Park).

NIGHT: From the 'Cathedral' to the financial heart

When you get your strength back, towards dusk we recommend you head towards the San Mamés Stadium. Considered one of the best stadiums in the world, is about ten minutes' walk from the park, and after its remodelling in 2013, the lighting of its façade when the sun goes down looks spectacular. This is the home of the Athletic Club lions.

At the end of the day, from San Mamés you can go to the Plaza del Sagrado Corazón and from there take the Gran Vía in of Plaza Moyua's direction. Here begins the commercial and financial centre of the city, also known as the Ensanche. In the area near the Biscay Delegation Palace there are several streets full of bars and restaurants, suitable for all tastes and budgets. As a curiosity, you will see that the underground entrances in the area have a large glass structure. These are popularly known as 'Fosteritos' in honour of their architect, Norman Foster, famous for also being the creator of great works such as London's 30 St Mary Axe. As a final destination, we encourage you to take a walk along the Gran Via and get off at an underground station so you can get to know it inside. With this, you will have already visited all Bilbao's essentials. 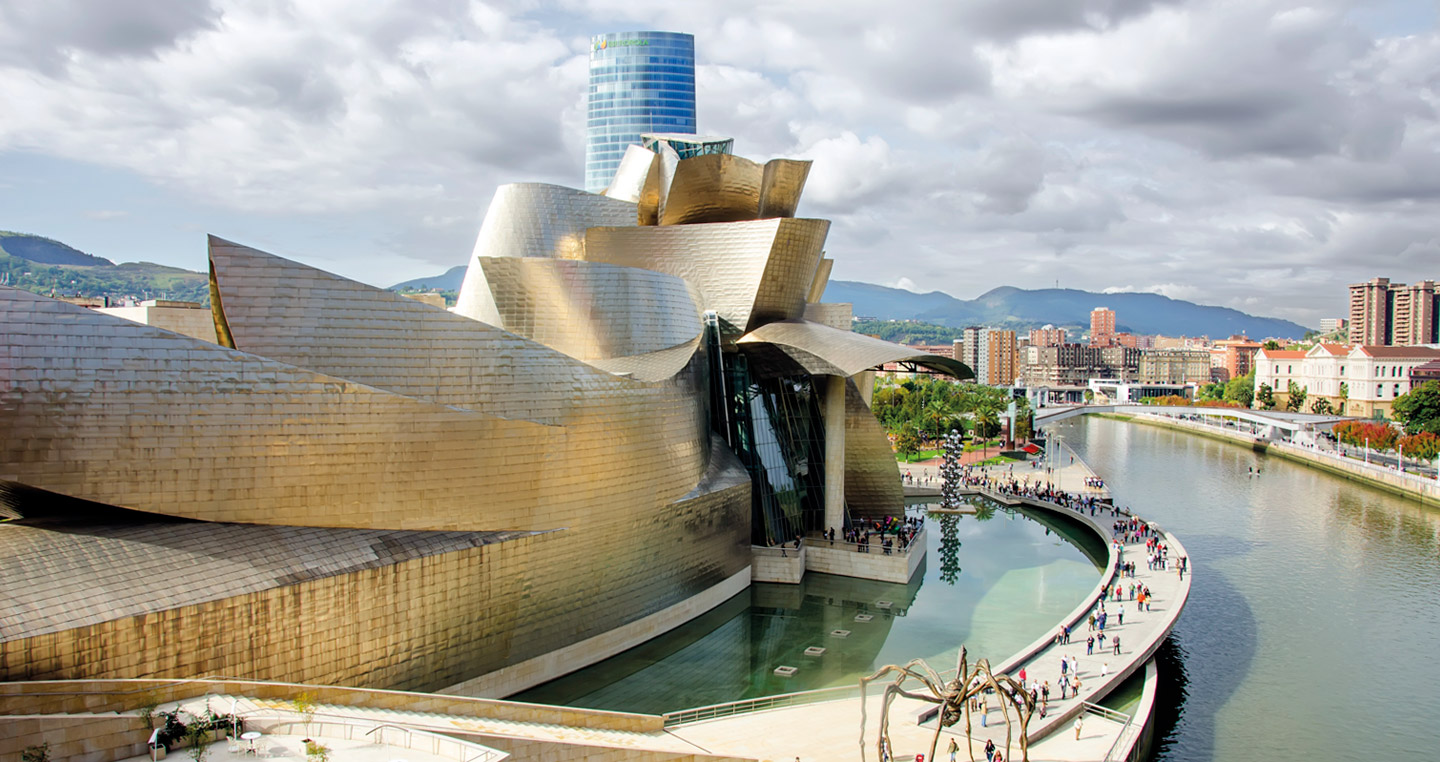 How to get around

It is important to bear in mind that the streets of the Old Quarter cannot be reached by car, and that the centre is usually crowded, so the best option is to use public transport. Bilbao has an excellent transport network, making almost any area accessible by metro, tram, train (Euskotren and Renfe) and bus (Bilbobus and Bizkaibus).