Lexuri, who describes our mountains as “life-giving”, wants to share with us a few tips on how to enjoy nature in Bilbao Biscay.

Loving and caring for the natural environment is in our DNA. From the deepest valleys sculpted by rivers and torrents to the summits that rise high above the clouds, in Bilbao Biscay we are enthusiastic about the nature that surrounds us, including our woods, beech tree forests and those charming villages where time seems to have stopped. 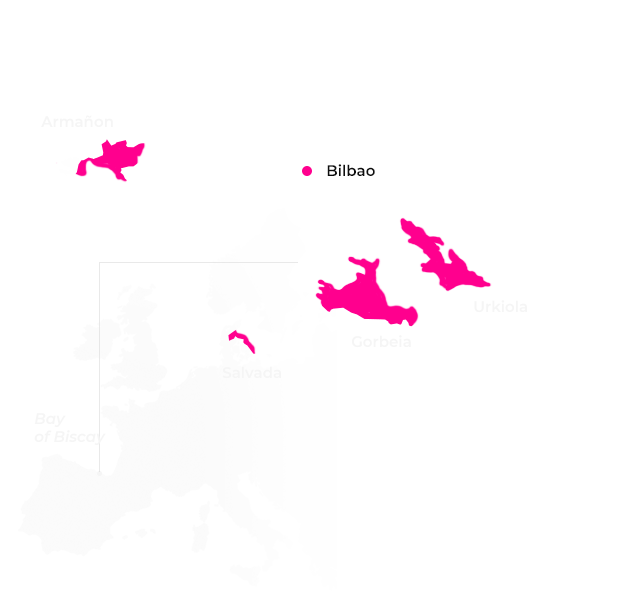 “The Biscayan mountains are my home”. These words, by Nature Lover Lexuri Crespo, define exactly the way the people who live in Bilbao Biscay feel about nature. A good pair of hiking boots and a backpack with a sandwich to recharge energy are the most essential things for those of us who, like Lexuri, take pleasure in the mountains that surround us. The fact that Bilbao Biscay is a natural territory, replete with wildlife and magical corners waiting to be discovered, has much to do with it. Paths that follow important medieval routes, footpaths that were mine railways once, trails that go up and down hills where surprising caves lie hidden, or tracks that lead to summits full of symbolism and tradition are just a few of the region’s highlights.

Our Nature Lover Lexuri, for example, grew up at the foot of Mount Serantes, in the maritime town of Santurtzi, where the annual Cornites pilgrimage is made on Easter Monday. On that day, the local people climb all the way up to the summit of Serantes to spend the day in the countryside and replenish their strength with “cornites”, a kind of bread made with chorizo and hard-boiled eggs. In Bilbao, climbing the closest mountains is also traditional on New Year’s Eve and New Year’s Day, when people say goodbye to the year that finishes and welcome the new one. Those days, two favourite destinations for the mountain enthusiasts (or “mendizales”) who live in the Biscayan capital are Mount Pagasarri and Mount Ganekogorta, but the most popular spot to see the first sunset of the year is Mount Gorbeia, the mecca for mountaineers in Biscay.

Crowned with a 17-metre-tall cross, whose structure reminds us of that of the famous cast-iron Vizcaya Bridge, the summit of Mount Gorbeia can be reached by different paths. Some of them – like the one that departs from Pagomakurre in Areatza – are pleasurable walks among fields, woods, and crags, while others – such as the one that starts in Ubide – run along ravines and cols, only apt for the most experienced mountaineers (among which Lexuri is included). Even though at the beginning our Nature Lover Lexuri Crespo ran solely in short-distance races, it made her “feel so free, so good” about herself that she ended up finding her place in the challenging world of ultra-distance mountain running.

Mount Gorbeia, 1,481 metres above sea level, is located in the centre of Gorbeia Natural Park, a true paradise both for wildlife and Nature Lovers. There is no better therapy to unwind than hiking along the paths that run through it while you discover the most amazing corners of the region. Spaces like the Itxina Biotope are real havens for plants and animals and its rock formations, which seem to be touching the sky, are a feast for the eyes. The magic of the legends and myths that were born in these mountains can still be felt in places like the Ojo de Atxular. This natural arch in the rocks formed by erosion under the shadow of Gorbeia has never stopped feeding the imagination of those who visit it on their walks.

Lexuri also likes getting lost in the Biscayan mountains to “get to know them better following their endless trails”, so she loves going to Enkarterri for a bike ride to explore the westernmost part of Biscay. Lexuri never gets tired of pedalling her bicycle up Mount Kolitza. She goes there from Balmaseda, the first town in Biscay (founded in 1199), which still preserves a remarkably rich heritage. Although the ascent to the top of Kolitza, at an altitude of 879 metres, is made across scarp and rugged slopes, among oaks and beech trees, its views are really worth the effort. As you get near the mountain’s highest point, next to the Romanesque chapel of San Roque on the edge of the precipice, you can see how Balmaseda and its neighbouring valleys begin to emerge right below your feet. Plus, if you pay careful attention, you may be able to hear the echoes of a horn. It is easy to understand why, in the Middle Ages, Kolitza was one of the five so-called “montes bocineros”, the mountains from where the people were called to attend the General Meetings held in the Casas de Juntas of Avellaneda and Gernika.

Easier and flatter cycling routes can be found in Enkarterri, too. The greenway called Vía Verde de los Montes de Hierro, for instance, runs through the region following a former mine railway line, crossing rivers and entering tunnels. You will spot imposing Egyptian vultures over the crags, pass by former ore loaders and ironworks (built more than 2000 years ago), and see the mine sites where the iron ore that brought fame to the region was extracted. Across bridges and wetlands where fish species like trout and salmon live and spawn, this cycling route will lead you through abandoned mining towns, fields where the livestock from our baserris (traditional farmhouses) graze, and forests. Finally, the route will take you to the coast in Muskiz, where it meets the Vía Verde de Itsaslur greenway on the edge of a cliff by the Cantabrian Sea.

Those looking for a different way to immerse themselves in nature and enjoy the peace of the countryside can opt for exploring the least travelled paths of Durangaldea –in the heart of the Bizcayan mountains– on horseback. Our Nature Lover Lexuri, who loves “showing people all the beauty that surrounds us, which is quite something”, did not miss the opportunity to go horse riding along the Zaldi Gorri Bridleway, a circular route around the whole Durangaldea and Urkiola Natural Park divided in three stages. At a gently pace, during her ride along unpaved tracks, Lexuri had the chance to feast her eyes on a “landscape that leaves anyone breathless, especially at the sight of Urkiola” and was delighted by the history and the heritage of the towns in region.

Apart from being home to Urkiola Natural Park, Durangaldea offers a wide variety of trails and activities any Nature Lover would like to take part in. The Ruta Mikeldi passes through the most authentic neighbourhoods of the region with its baserris –our traditional farmhouses–, medieval roads, tower houses, and other legendary places. The Vía Verde de Arrazola is a gentle walk in a rural environment, a greenway at the foot of Mount Anboto. The Wine and Fish Route in Durangaldea, a two-stage trail that follows a former medieval route used for the exchange of the wine produced in La Rioja and the fish caught in Bermeo and Ondarroa, passes by the towns of Otxandio, Urkiola, Mañaria, Izurtza, Durango, Garai and Berriz. Mount Oiz, one of the five previously mentioned “montes bocineros”, located in the geographical centre of Biscay, is another popular summit among climbers.

In Durangaldea, any adventurous Nature Lover like Lexuri can find experiences that will push them to the limit of their abilities. No matter what activity you choose: mountain biking, guided hiking tours, climbing, caving, canyoning, or orienteering, this is the perfect location for adventure. 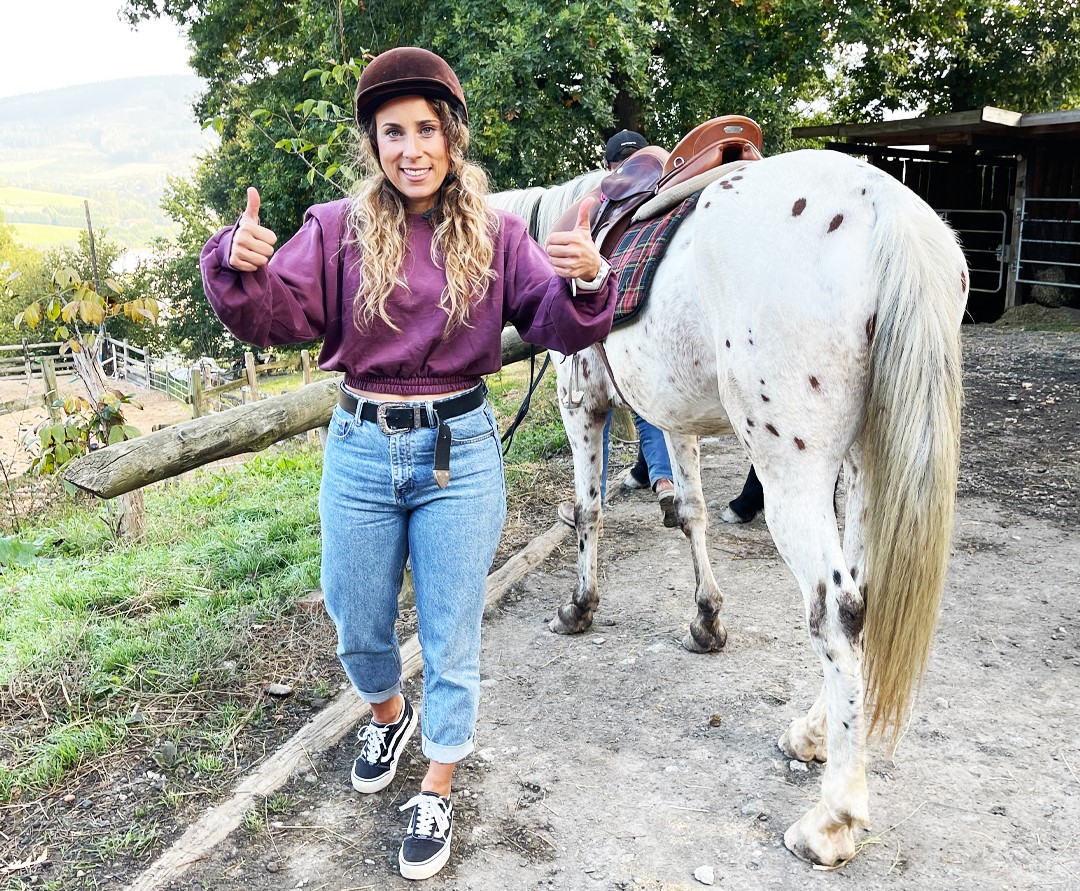 “The Biscayan mountains are my home”. These words, by Nature Lover Lexuri Crespo, define exactly the way the people who live in Bilbao Biscay feel about nature.