Ea, the town with the shortest name

Two vowels. This is the story behind the shortest name of all the towns in Biscay.

Ea is a small town on the coast, almost as small as its name, located in the Urdaibai Biosphere Reserve.

To be precise, this beautiful spot is located halfway along the coastal road joining Elantxobe to Lekeitio

THE “VENICE” OF THE BASQU COUNTRY

You realise how special this village is as soon as you step foot in it. There is no doubt that every village in Biscay has its own personality, but we think this is even more evident in Ea. Whether it is because of its picturesque streets, the river flowing through the town or the beauty of its stone bridges, Ea is known as the “Venice” of the Basque Country. And no wonder! 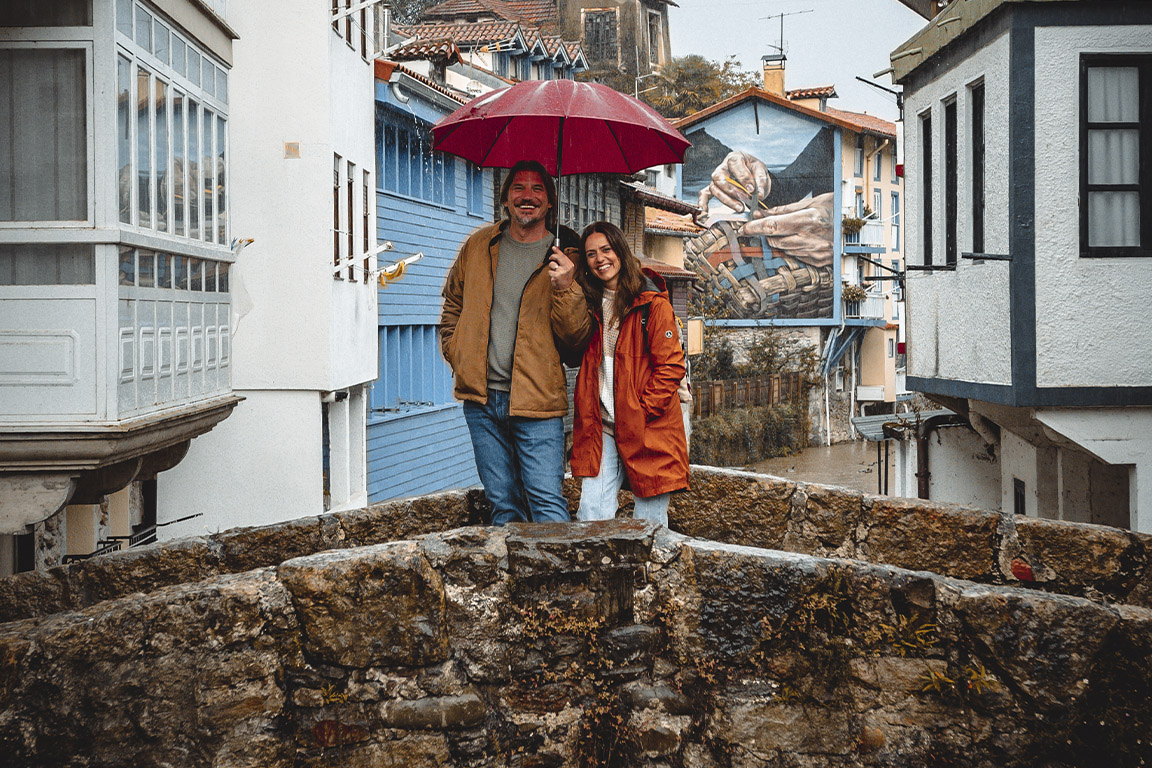 The houses in this town are built along the river Ea, which flows through the middle of it. Its streets run parallel to this, and flow, in the same way, towards the sea. As you walk along the main avenue towards the sea, you will find four bridges that allow you to cross from one side of the town to the other. The most famous of these is the Roman bridge, a typical postcard scene from Ea.

The sea is one of Ea’s great attractions, and what gives the village its seafaring roots. You only have to continue walking along its narrow streets towards the sea to come across a small fishing port, where sailors venture out to sea. The boats, like everything else in Ea, are small.

EEa’s landscape changes dramatically with the tide. When the tide is out and the water recedes, the sandy beach becomes much larger, ideal for sunbathing, swimming or even taking a stroll. The difference in sea level caused by the tide is so great that boats in the harbour cannot go out to sea at low tide, as they are stuck in the sand.

One of the most beautiful places from which to enjoy a panoramic view of the area is the Atalaya Lookout. This is located past the port, at the estuary of the river Ea, and at the gates of the Cantabrian Sea. From there we can watch the sailors of Ea fishing, and their comings and goings from the port out to sea. It is also one of the best places from which to look back and enjoy the beauty of Ea, one of the hidden gems of Urdaibai. 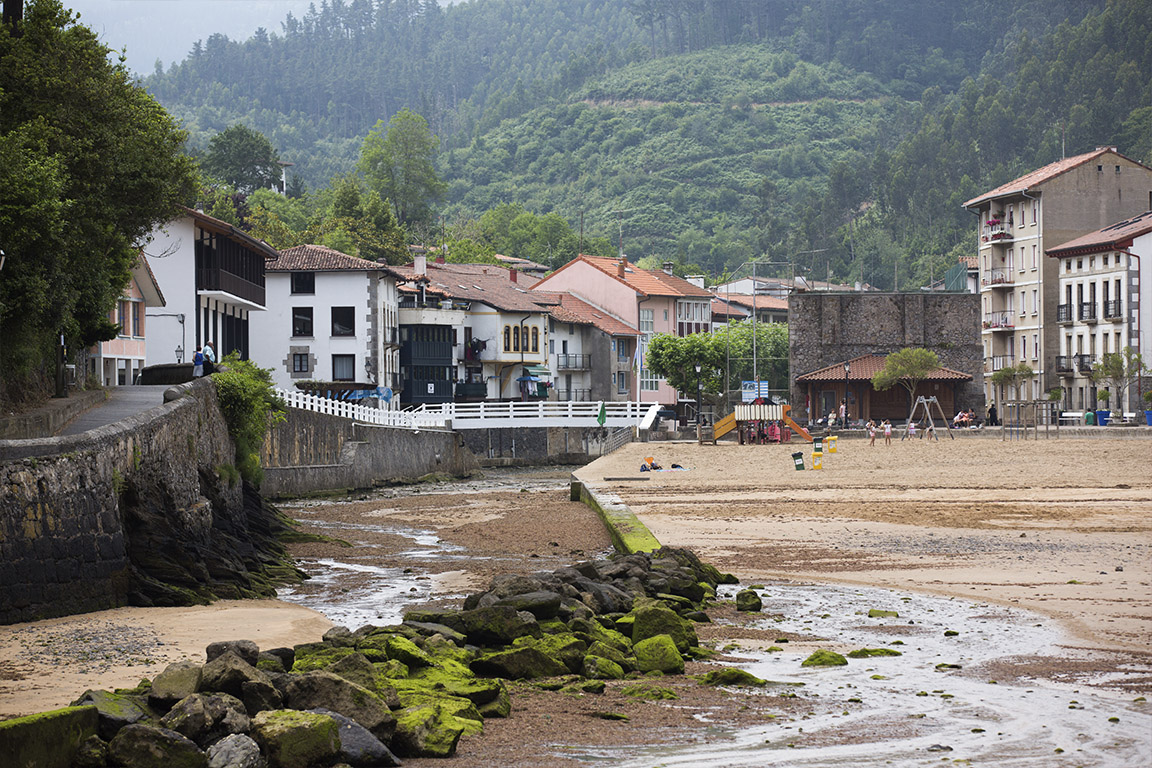 The town of Ea is located in Urdaibai, a region that in 1984 UNESCO declared a Biosphere Reserve. Throughout this region’s 22,000 hectares we can find beaches, cliffs, rivers and underground waters that combine to make this space a paradise for flora and fauna.

The role of the Urdaibai Reserve is to protect the genetic resources, species, ecosystems and geological heritage. It currently has 729 species of fauna, 821 species of flora, 86 habitats and 43 sites of geological interest.

What to do in Ea

If you become caught up in the charm of this town, we suggest a number of plans to make the most of your visit to Ea.

From the centre of Ea you can find a path that leads to the Urtubiaga mill and foundry. This is an industrial complex of great value dating back to the 15th century and it still has its walls, arches and old dams. This is an easy walk that will allow everyone to enjoy Ea's natural landscapte and history.

Even higher than the Atalaya Lookout is the Ermita de la Concepción. They say that some fishermen found an image of the Immaculate Virgin in the sea, and because of this they decided to build the hermitage. It can be reached along a pathway from the centre of the village..

In addition to the aforementioned sandy beach in Ea, the town offers a number of other beaches, such as the rocky Lapatza from Ea beach and the Lapatza beach located in Natxitua. If you are more into rugged, uncrowded beaches, don’t miss out on a visit to these.

What to do in Urdaibai

The village of Ea is just one of the hidden corners of the Urdaibai region. Below is our recommendation for the best things to do to make the most of your visit to this area.

Guernica, a town with a lot of history

Guernica is one of the most symbolic towns in our region. It is home to the Gernika´s Assembly Home where the people of Biscay used to meet to decide on their laws, coming together under the famous Tree of Guernica where today the Lehendakari (President of the Basque Government) and the General Governor of the Historical Territory of Bizkaia take office. This town is also known for the bombardment that devastated the town in 1937 and which was the inspiration for Picasso to paint his famous painting “Guernica”.

A walk through the Urdaibai marshland

There is an option to go to the very heart of the Urdaibai Biosphere Reserve and surround yourself with nature. We are talking about the Urdaibai marshland walk, a beautiful route suitable for all levels. This walk starts in Guernica and ends in Kortezubi, passing through Forua. The route’s wooden walkway allows us to take a stroll while admiring the flora and fauna in this enclave.

If you are looking for more excitement, we have the perfect plan for you, namely climbing San Pedro de Atxarre, the best viewpoint in the whole of Urdaibai. From there, the views of the Biosphere Reserve are breath-taking. That said, the climb from Laida beach is fairly demanding, so you’ll need to wear hiking gear and suitable footwear if you plan to do it.

All along the coast of Biscay are numerous picturesque towns with a strong seafaring tradition: Zierbena, Santurtzi, Portugalete, Getxo, Plentzia, Gorliz, Bakio, Bermeo, Mundaka, Lekeitio and Ondarroa. If you are a fan of the sea, each of these has a different past that you cannot miss out on discovering during your visit to Biscay.