A green escape for #NatureLovers

Enjoying Bilbao Biscay’s natural inland wonders is within everyone’s reach. A few minutes away from any place in the region, there are summits that disappear behind the clouds, ancient forests full of life, mythological caves that will make your imagination fly, narrow valleys where mighty rivers flow, and towns and villages that keep their historic charm intact. The heart of Bilbao Biscay is beyond doubt green.

In Bilbao Biscay, we love getting lost in nature with our friends or families. Any excuse is a good excuse for putting on our walking boots and exploring mountains, pathways and valleys. To start the year well, there’s nothing like welcoming it by watching the sun rise from the cross at the top of Mount Gorbeia – our highest mountain with an altitude of 1,482 metres. The ascent to its summit across Gorbeia Natural Park is made amid spectacular sceneries, dense beech and oak woods, meadows scattered withlatxa sheep – the sheep whose milk is used to make delectable Idiazabal cheese –, and other natural wonders such as the Gujuli Waterfall, or the labyrinthine caverns in the Protected Biotype of Itxina.

It is in this magical place – inside the cave of Supelegor to be more precise – where legendary goddess Mari resides, although Anboto is also considered to be her dwelling place. Mount Anboto is one of the most popular mountains in Biscay, and a mecca for mountaineers. It is located in the centre of Urkiola Natural Park, in an environment full of life and contrasts, home to 137 animal species and 700 types of plants. There, a wide variety of routes take you through woods and among karst walls, which are perfect for climbing. We can also discover places for worship like St Antonio Abad and St Antonio Padua’s Sanctuary, and its enigmatic rock. As legend has it, if you go round the stone seven times, it will help you find a partner.

Another surprising natural region in Biscay is Armañón Natural Park. Its karst rock formations and its particular microclimate provide the perfect habitat for eagles, vultures and bats. Within its boundaries, the Encinar de Sopeña is filled with holm oak and European beech forests. However, the gems of the park are unquestionably its over 200 caves. Pozalagua, located in Peñas de Ranero, is an instance of one of these magnificent subterranean marvels. It contains the greatest concentration of helictites in the world. These twisted formations defy gravity and fill the cave’s walls with unique and beautiful shapes.

Enkarterri is home to the wild Hayedo de Balgerri, the largest beech forest in Biscay. You can see it in its full splendour in the autumn, when all leaves turn ochre. The Vía Verde de Itsaslur, one of the four scenic routes in Biscay, gives you the opportunity to walk or cycle in the for 2.2 km along former railway tracks until you reach the sea, as you follow the traces of the region’s industrial archaeology. The Muñatones Castle, an imposing military fortification owned by the Salazar family, stands in the town of Muskiz. The remains of the Castle of Unzueta, a medieval fortress, still rest high above the town of Orozko. The Butron Castle in Gatika is a medieval construction that once defended the northern territories. In the 19th century, it was transformed into the Romantic building surrounded by exotic gardens that we can see today. In the Urdaibai Biosphere Reserve, the neo-Gothic castle of Arteaga was originally a medieval tower, to be later rebuilt by Eugenia de Montijo. Meanwhile, perched on the cliffs of Getxo, the fort of Punta Galea was erected to prevent pirates from sailing up the River Nervion.

Surrounded by abundant nature, Biscayan inland towns also abound in artistic and natural heritage, a remnant of the lifestyle and customs of the people who inhabited their streets in the past. The old wall and its gates welcome you into the historic town of Elorrio, inviting you to admire its 17th and 18th-century palaces and manor houses; or the basilica of La Purísima Concepción, where the remains of St Valentín de Berrio-Otxoa lie. Near the Salto del Nervión, an impressive plunge waterfall, you can visit the border town of Orduña, which is the only municipality in Biscay officially denominated as ‘city’, and whose medieval square is the largest in the Basque Country.

Immersed in a landscape dominated by mountains, forests and baserris – typical Basque farmhouses –, Orozko is one of the ways into Gorbeia Natural Park; while Durango, a town with over 700 years of art and history at the foot of Urkiola Natural Park, is home to a rich collection of historic buildings such as the monumental Arch of Santa Ana; the basilica of Santa María de Uribarri, with its huge wooden portico; or the Kurutziaga Cross, an extraordinary Gothic transept.

The Renaissance and Baroque palaces in Markina give proof of the town’s splendid past. The same can be said about the Plateresque cloister of the Collegiate Church of Ziortza and the Monastery of Zenarruza, located a few kilometres away, which has welcomed the pilgrims who have travelled to Santiago de Compostela along the Northern Way for nine centuries. This pilgrim route, also called the Coastal Way, crosses Biscay from Markina-Xemein in the east to Kobaron in the west, making its way through a number of historic locations. Among these places is the town of Gernika, famous for its Casa de Juntas and its Tree, symbols of freedom in Biscay. As it continues, the route passes through the Basilica of Begoña, home to Biscayans most beloved 'Amatxu', and the Church of San Antón, in the very heart of Bilbao. A little farther on is Bizkaia Bridge, in Portugalete, a silent witness to the glorious industrial days of the region back in the 19th century, and one of the four World Heritage Sites we currently have in Biscay. 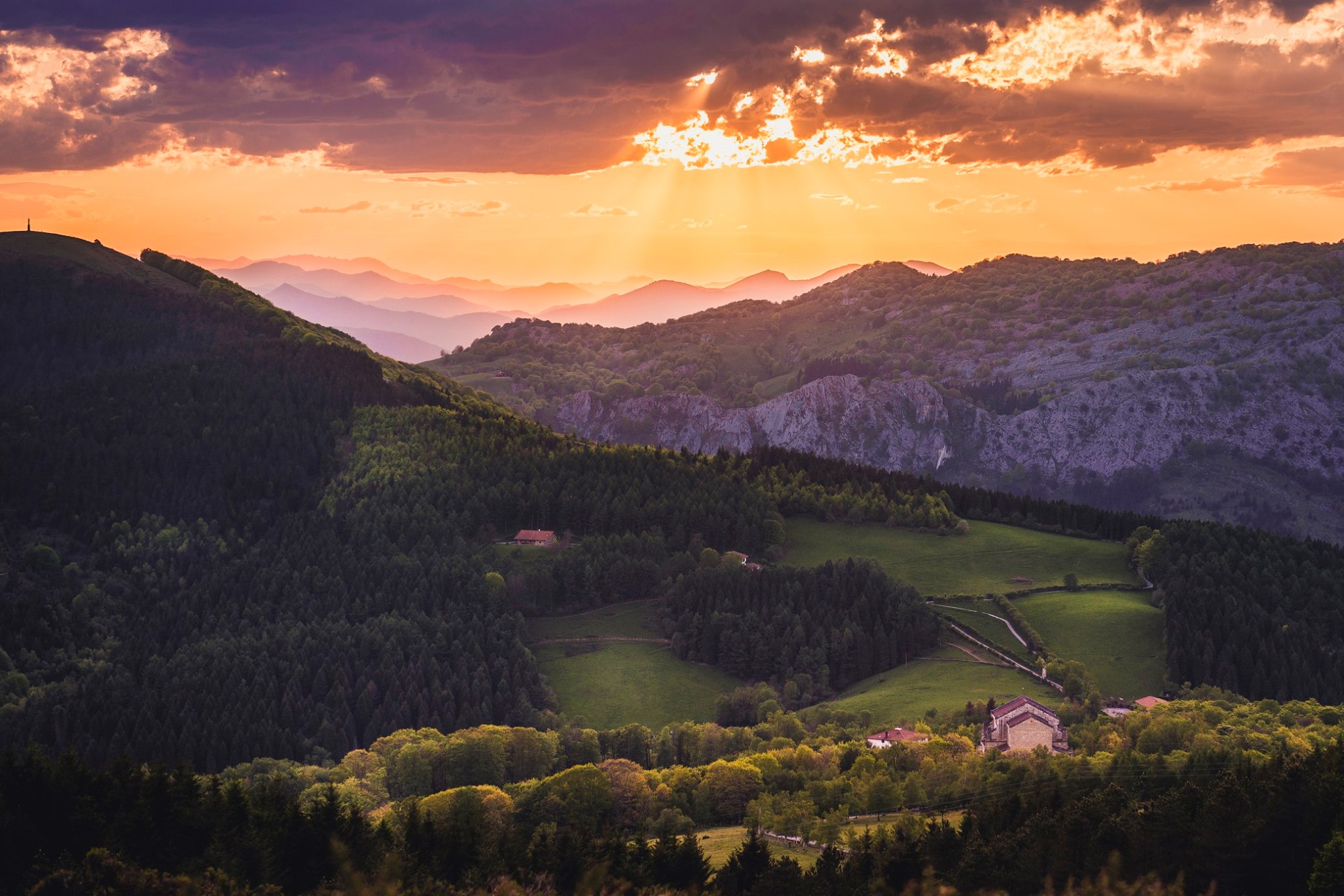