25 years of the Guggenheim Museum Bilbao

The most recognisable landmark in Bizkaia’s capital is now quarter of a century old. It reflects the perfect symbiosis between art and the city. There is no Bilbao without the Guggenheim, just as there no Guggenheim without Bilbao.

Thanks to this museum’s popularity with tourists, Bilbao has become one of the most popular holiday destinations for many of our visitors and the city is now known around the world.

What makes the Guggenheim Museum Bilbao so special? It could be its design, the works of art that can be seen there or simply the feeling of magic that it gives off. Whatever the case, it leaves a mark on everyone.

A symbol of the city of Bilbao

Today, the Guggenheim Museum, which has become a symbol of the city of Bilbao, is celebrating its 25th anniversary. This contemporary art museum was designed by the Canadian architect Frank O. Gehry and represents one of the most ambitious cultural projects seen in the last century. It is now one of the most recognisable museums in the world. You could argue that the addition of this museum was a turning point for the entire city.

Since its early years, the Guggenheim Museum Bilbao has been developing a collection of leading works of art, dating from the second half of the 20th century and running up to the present day.

Among those forming part of this museum’ collection, some stand out for being contemporary icons, works that from the very start have won the admiration of visitors and become leading examples of contemporary art.

Walking around the museum’s incredible modern facilities, we find different sculptures, paintings, classics and even permanent and temporary exhibitions and collections.

Among its most outstanding, internationally recognised works are several by well-known artists, such as "How profound is the air" by Eduardo Chillida, “Installation for Bilbao” by Jenny Holzer, “Tulips” by Jeff Koons, the oil on canvas “Untitled" by Mark Rothko, "The Matter of Time" by Richard Serra and “Maman” (the spider) by Louise Bourgeois.

The legacy of Eduardo Chillida

When thinking about all the artists appearing in the museum's collection, we cannot forget Eduardo Chillida. Over the course of five decades, he became one of the most important Basque artists of the 20th century and was a leading figure internationally. He created various monumental and location-specific public sculptures, as well as works of a more conventional size.

In his works he used materials representing Basque traditions in industry, architecture and agriculture, and also recalling the typical Basque landscape. 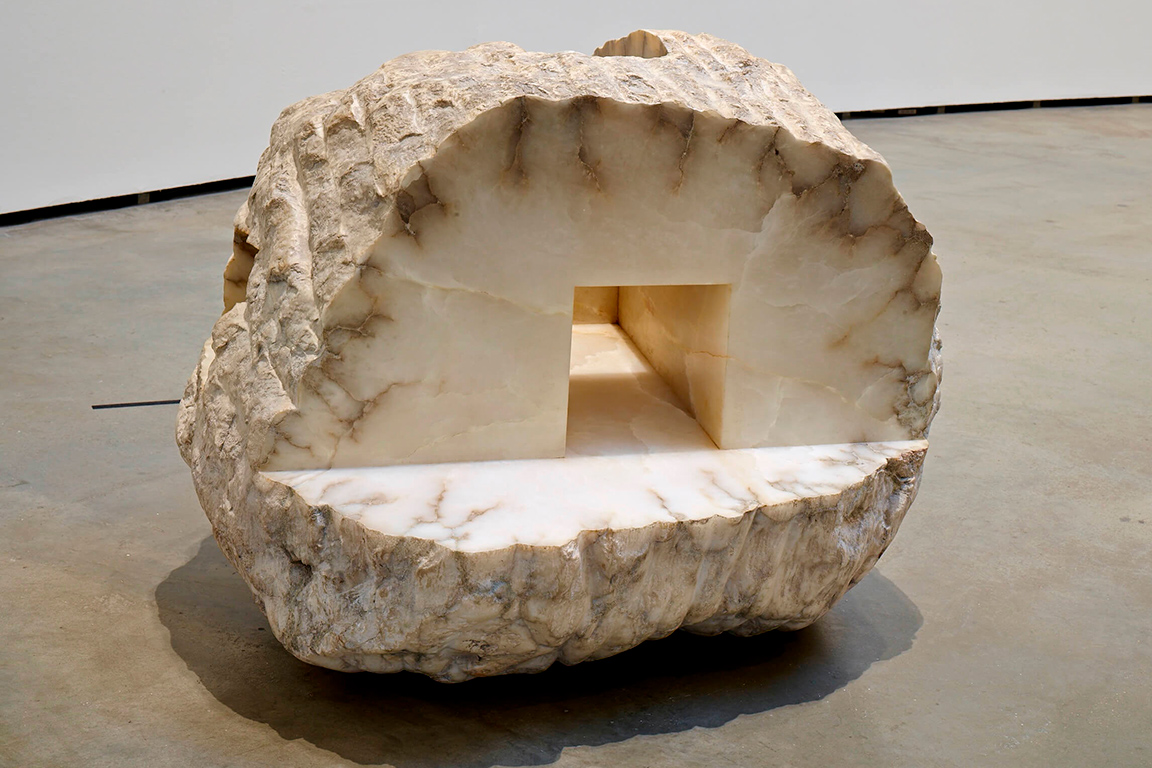 In addition to the sculpture entitled Puppy, the artist Jeff Koons has another beautiful sculpture worth visiting next to the Guggenheim. Tulips can be found at one end of the terrace, at the back of the museum. As well as adding a burst of colour to the area, it is one of the museum's main attractions due to its contrast with the colour of the museum itself.

As you would expect, it is more than just a sculpture of a bouquet of tulips. Instead, it is designed and conceived to convey a feeling of contrast with the steel used to make it, provoking irony, astonishing visitors and enhancing its artificial appearance. 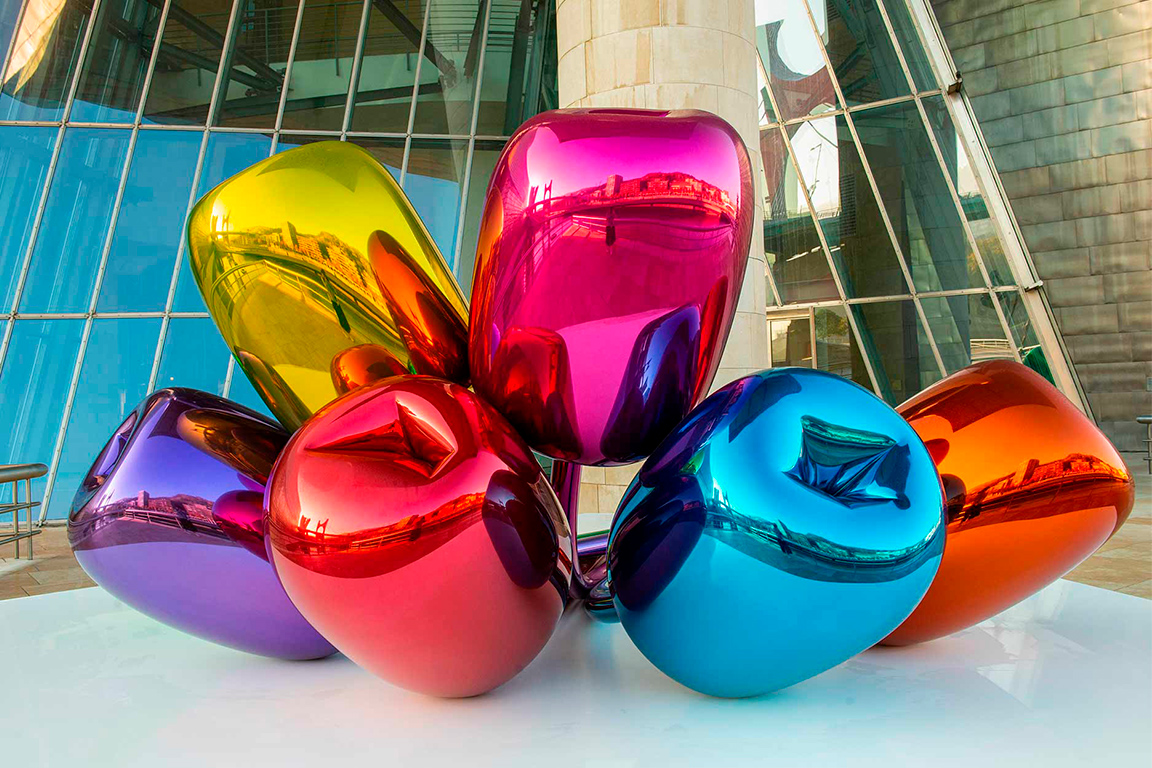 Maman, at almost 9 metres high, is one of Bourgeois' most ambitious sculptures and it can be found outside the museum next to the estuary. Every day hundreds of tourists come to gape at it in fascination and take photos. It is without a doubt one of the most recognisable works in the entire museum.

The central theme of this work is motherhood. The mother, in this case the spider itself, is protective and predatory at the same time, weaving her silk both to make a cocoon and also to defend against predators. It represents, in a few words, a mother's urge to protect her children and fight her enemies. This is a very recognisable work that breaks with tradition and reflects the museum’s modern approach. 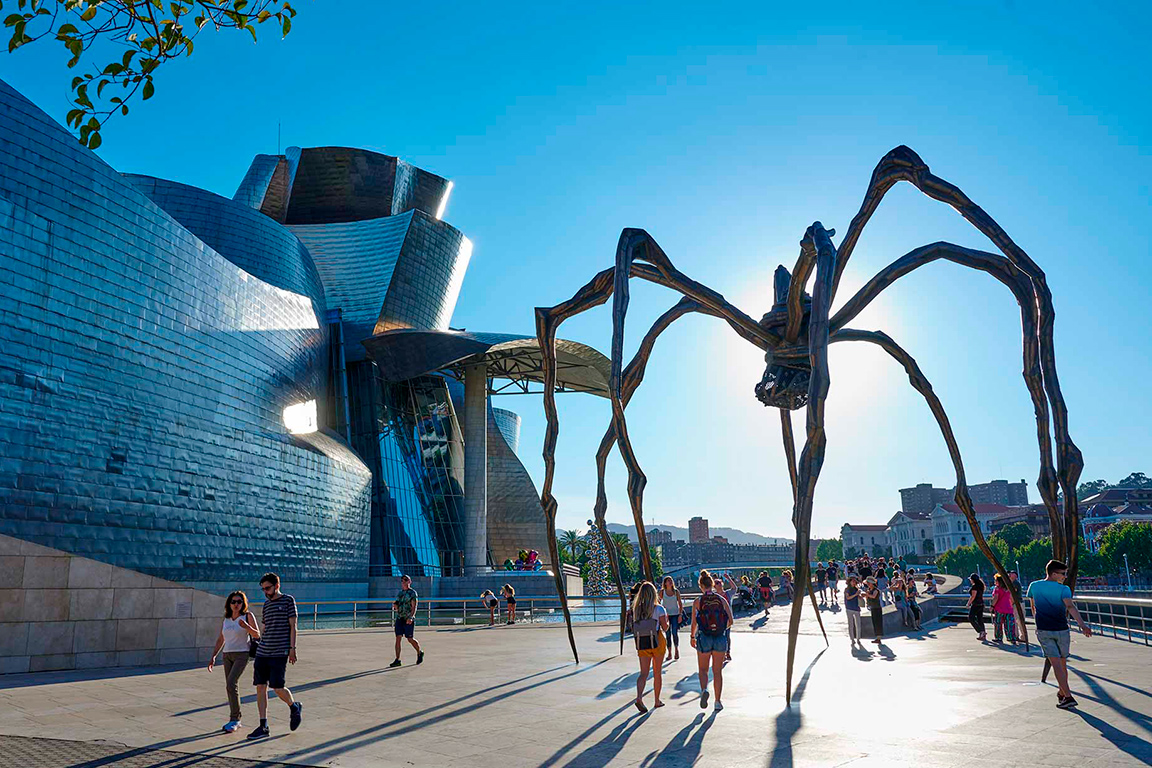 In this work by Jenny Holzer, she uses surprising texts to attract the attention of visitors. It is one of the works in the museum that attracts the most attention and arouses the most curiosity due to its uniqueness. Many tourists stop and stare at the text and the message the author wants to convey.

This work aims to transform art into a commercial and consumer item and comment on the relationship between private and political realms. There is no doubt that this is a unique work that does not go unnoticed, far from it. 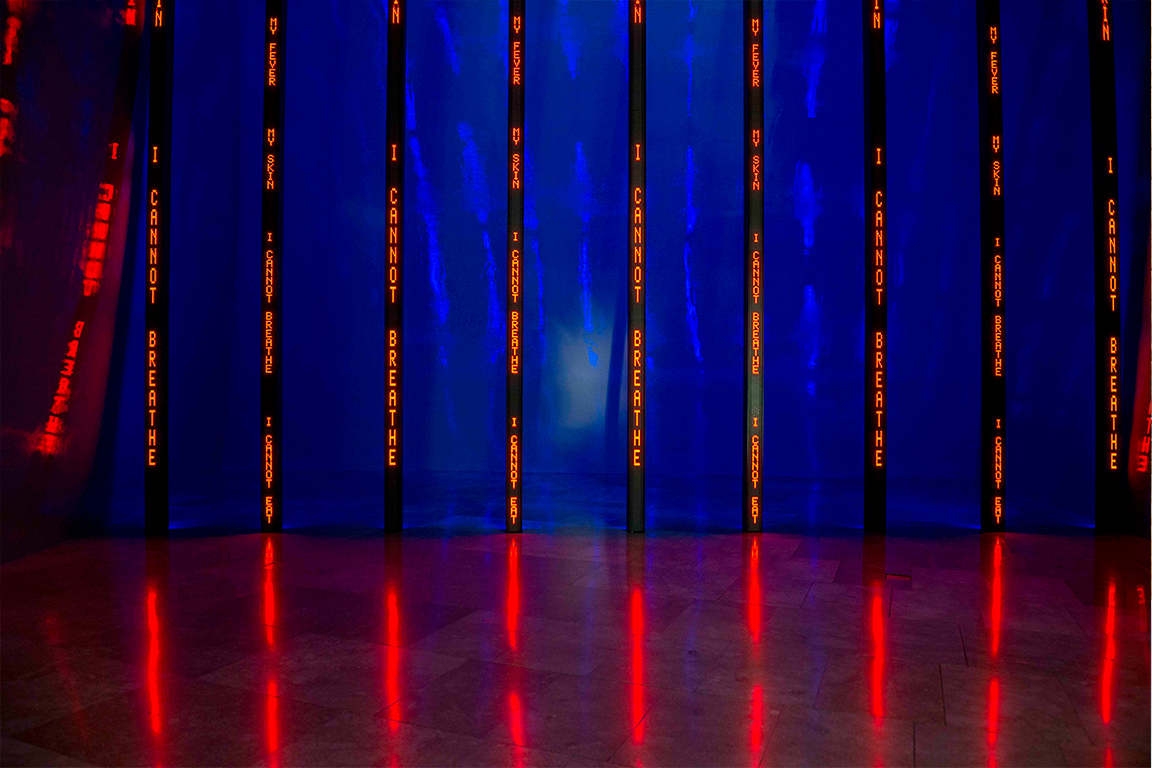 The Matter of Time by Richard Serra

We cannot forget the works of Richard Serra that simulate moving through a maze inside the room itself. These works are transformed as the visitor walks around them, creating an unforgettable, dizzying feeling of space in motion.

The installation also includes a progression in time. On the one hand, there is the chronological time it takes to walk through and observe it from start to finish; on the other, there is the time during which the visitor experiences the fragments of visual and physical memory, which are combined and are re-lived. 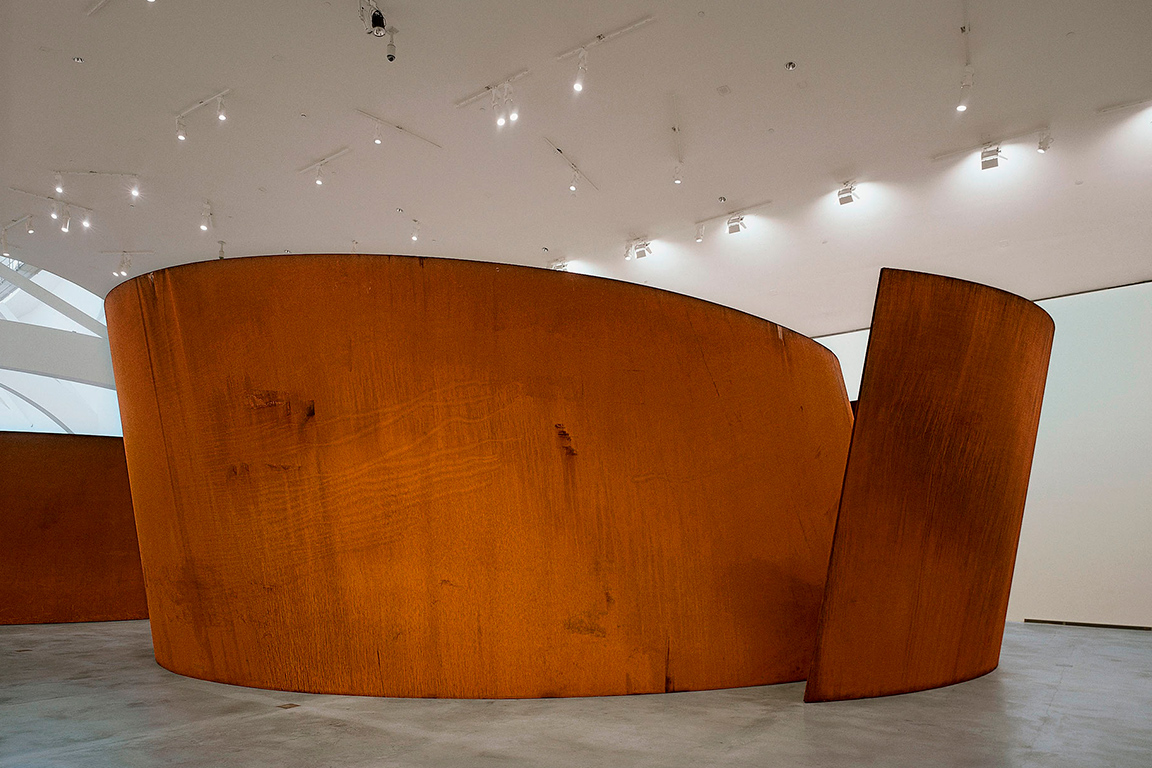 Last but not least, we have Puppy, the Guggenheim’s watchdog. This work is decorated with flowering plants which change over time. According to Jeff Koons, the purpose of the work is to attract, arouse optimism and instil "confidence and security".

Puppy is another of the museum’s leading attractions, as you can tell from the large number of visitors who come every day to be photographed next to him.

You won't be able to leave Bilbao without taking a photo with the most famous dog in the whole city! 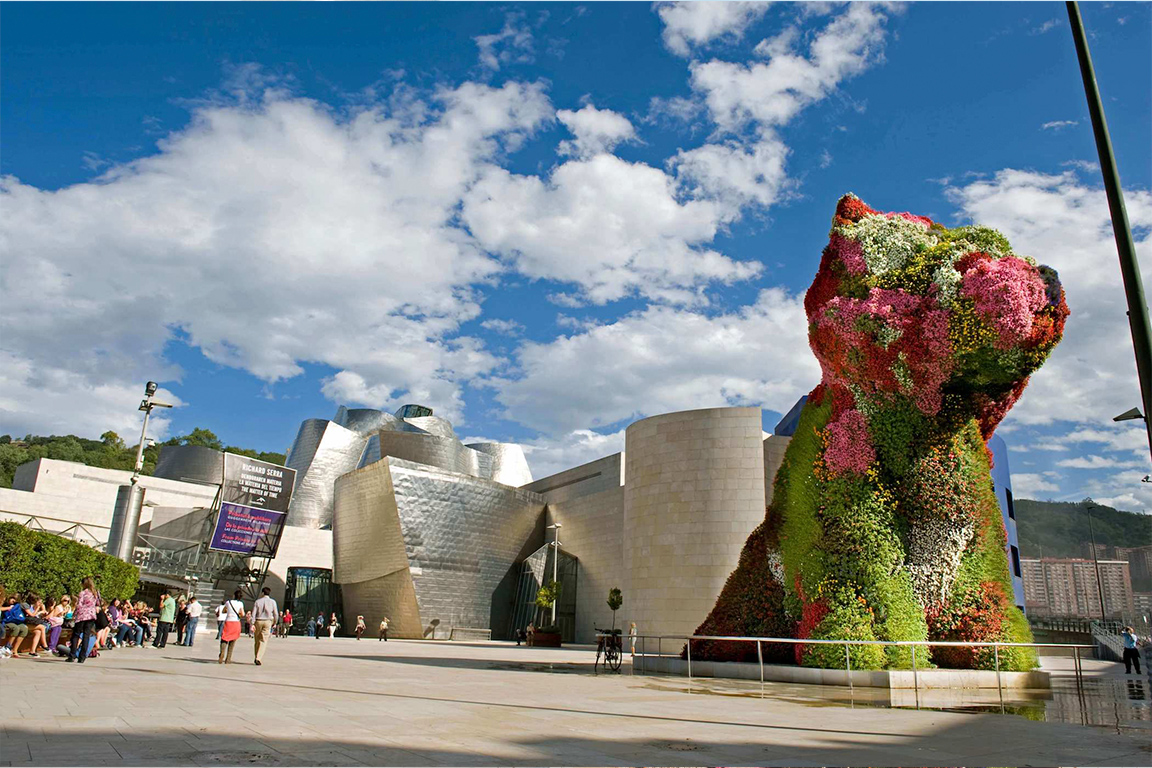